Where water is born, the history and importance of rivers - El Faro | Canal de Panamá

The Panama Canal and the Albatros Foundation join forces to highlight the importance of water resources.

Since ancient times, water has marked the success or decline of entire civilizations. Today, it is a fact that the Panama Canal does not lose sight of this reality, hence its ongoing commitment to the conservation and efficient use of water resources. 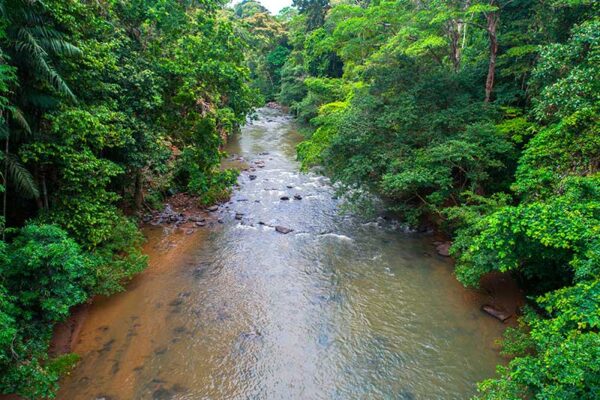 In January of this year, the Panama Canal takes you, through Canal TV, to Donde nace el agua (Where the water is born).

Donde nace el agua, is the name of a series of 60-minute documentaries, in which young Panamanians relate their experiences while traveling through eight rivers in the country, from their source to their mouth.

This is an effort that involves the new generations, who show great environmental awareness; young people who love their environment and, in this story, narrate the adventure of traveling through the Panama Canal Watershed (CHCP).

This is the opinion of Karina Vergara, the Canal Watershed Manager, after watching the first of the documentaries.

“We have the journey of a river from the moment it is born; that nature that what it projects is an environment, as the children describe it: humid, an environment that sounds like it is very natural and pristine… that is protected.” Karina Vergara.

However, Vergara warns, along the journey through these rivers, the viewer realizes that human interaction causes these tributaries to lose some of their quality. However, she is optimistic that it is not too late, on the contrary, “we are in time” to reverse this management of rivers and water quality for those children and young people who, through these documentaries, are making a clear call to correct the course.

The health of rivers varies according to the region where they are located, whether in rural areas or in urban areas with high industrial activity. For example, it is observed that the Trinidad river, in the Canal Watershed, where there is a well-preserved environment along the middle watershed, and then agricultural and livestock activities that, although they affect the quality of the water resource, the management is controlled. On the contrary, others, such as the Matasnillo, which flows through the center of Panama City, where the interference of industrial activity, with its consequent waste, makes its contamination visible in the color of the water and the biodiversity along its shores.

“With years and good river management, pollution can be reversed. Of course, these processes will cost some more than others, but it will require everyone’s effort.” Vergara stresses.

The series Donde nace el agua is produced by the Albatros Media Foundation, in a Panama Canal project that travels the rivers of the CHCP to Azuero, Veraguas and Chiriquí.

The documentaries are produced with underwater filming equipment, drones and 4K cameras with high speed recording, recording varieties of species in the area, as well as the experiences of young people to meet their rivers.

Each documentary piece narrates, in the testimonial voice of young people from each community, the history and importance of the rivers in the balance of their communities.