Among the fuels that generate carbon are wood, coal, oil and gas, the latter being the most widely used for electricity generation, transportation, industrial production, and commercial and residential consumption.

The transformation of these fuels into energy produces, among other things, emissions of carbon dioxide (CO2), a greenhouse gas that causes climate change associated with human activities.

What is the Panama Canal doing?

The evidence is right in front of our eyes. The effects of climate variability on our environment are obvious: droughts, floods, low rainfall and storms.

In the Canal Watershed, for example, the effects of climate have been reflected in a shortage of rainfall, affecting the level of the Gatun and Alhajuela Lakes, sources of water for almost half of the country’s population and the operations of the interoceanic waterway.

Although, as the shortest route in maritime transport, the Canal contributes to the emission of less polluting gases by ships, the interoceanic waterway recognizes the importance of achieving carbon neutrality in its operations.

“Before the end of this decade, the Panama Canal will be carbon neutral. We are going to eliminate carbon emissions and that is a strategic task to which the Canal is committed,” announced Administrator Ricaurte Vásquez Morales.

The interoceanic waterway has advanced this process, as it has been aligned for several years with the global objectives of reducing emissions and adapting its operations to climate change.

“The Panama Canal has multiple ways in which it contributes to reducing emissions globally. The main one is precisely the conservation and reforestation programs it generates in the watershed. In addition to this, there are also programs that are developed in conjunction with customers and the operations themselves, measuring the environmental impact, the carbon footprint and the reduction of polluting gases generated at the environmental level”. 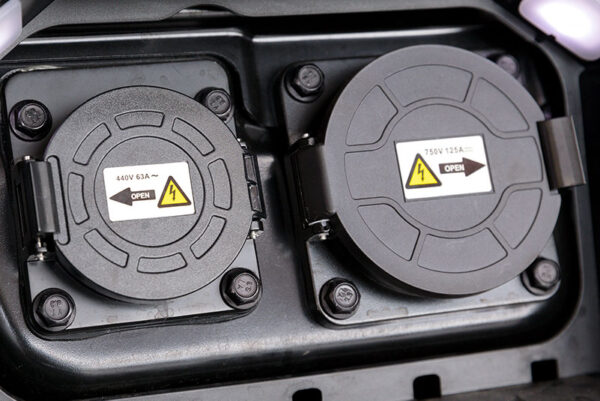 Now, the goal is more ambitious by proposing the gradual elimination of the use of fossil fuels and the integration of clean energies, in addition to reinforcing the measures already implemented by the Canal for energy efficiency and in its water and environmental conservation programs.

But how is this achieved?

“We continue emphasizing the use of hydraulic energy and trying to turn the Canal into a greener entity, which will lead us to electric cars and a design of facilities that are environmentally robust,” the Administrator explained.

In order to initiate the transition to a greener company, the Panama Canal incorporated four electric cars as part of a pilot project to collect enough data to migrate its fleet to vehicles that do not use fossil fuels, thus eliminating this source of pollution.

The decarbonization process is gradual and involves incorporating new technologies into Canal operations.

“This will mean that our launches and tugboats will have to change technology to use non-fossil fuels, reduce the carbon footprint emitted by the Panama Canal, and to that same extent, take advantage of the opportunity, because the costs of protecting the environment must be paid by mankind, and those costs incurred by the Canal must be recovered through our pricing mechanisms,” added the Administrator.

Undoubtedly, it is an ambitious goal, but our planet and our country require urgent action, now.