We often hear the saying that Panama is “bridge of the world and heart of the universe”. The first part responds mainly to the country’s geographical position and its traditional role as a transit point. The second is a bit more romantic, if you want to think of it that way.

And precisely as an evolution of this transitism, the idea of an inter-oceanic route that we know today as the Panama Canal, was born. For more than a century, this waterway has shortened distances and transportation time between production centers and the world. Literally, the Panama Canal is a shortcut to world trade, and when one looks at the connectivity numbers offered by the route, one can see that the phrase “bridge of the world” has real substance. Based on the origin and destination of the more than 13,000 transits it registers annually, a total of 180 maritime routes converge through the Panama Canal, reaching 1,920 ports in 170 countries.

About 70% of the ships that use the Panamanian route handle cargo originating or destined for a port terminal in the United States, mainly located on the East Coast of the North American country, which makes it by far the largest user of the interoceanic waterway.

For decades, the United States has been at the forefront of Panama Canal user countries, with China in a distant second place, as confirmed by statistics for Fiscal Year 2020, when 69% of the cargo transiting the Canal had the North American country as its origin or destination.

China and Japan were close behind with 15% and 14% of cargo, while Chile, South Korea and Mexico rounded out the top six with between 11% and 9% of long tons originating and destined for these countries connecting the West Coast of South America, and another 7% (18.9 million long tons) linked to the West Coast of Central America.

Of the 180 maritime routes that converge in the Isthmus, 39% of the cargo links points between Asia Pacific, mainly from China, South Korea and Japan, and the East and Gulf Coast of the United States. This is explained by the fact that the largest production centers are concentrated in the Asian region, while the North American market includes urban areas of high consumption such as New York, Georgia, Florida and Texas, among others. According to Canal statistics, during Fiscal Year 2020, the interoceanic waterway mobilized 99 million long tons within this route.

In fact, the East Coast and Gulf region of the United States ranks second and third among the rest of the routes that pass through the Panama Canal, with 13% (32.5 million long tons). 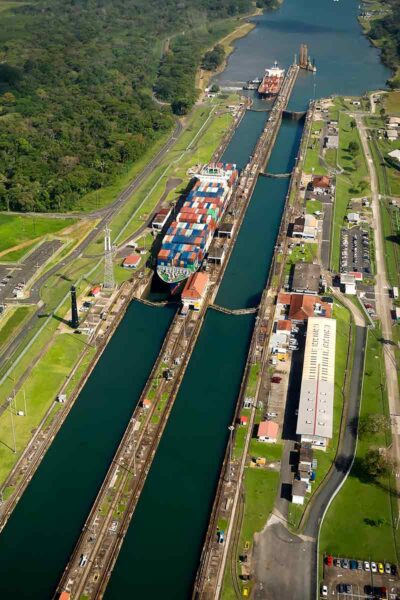 The United States, the big user

The United States, as the main user of the Panama Canal, is a major player in the movement of containers arriving at the ports of that country, mainly those of the East Coast and the Gulf.

According to available data, about 40% of the containers arriving at U.S. East and Gulf Coast terminals are moved through the Panamanian shortcut.

For example, 56% of the containers that are unloaded at the port of Savannah arrive through the Panama Canal, while the market share of the interoceanic waterway in Houston reaches 48% and in high consumption centers such as New York/New Jersey it averages 30%.

All these numbers speak of the connectivity offered by the Canal, enhancing Panama’s strategic position as a commercial shortcut. This is because passage through the Panama Canal considerably reduces the sailing time of ships from the East and Gulf coasts of the United States to markets in Asia. For example, sailing from the east coast of North America to Asia takes 20 days, compared to 35.6 days for Cape Horn voyages, 31.6 days via the Cape of Good Hope or 29.5 days if transiting the Suez Canal.