The sun reached its highest point over the protective forest of Arraiján, on the western edge of the Canal. Its rays pierced vertically through the jungle canopy, and were projected sharply on the foliage. Between light and shadow, a yellow and black figure moved, curving its body to fit the shape of the trees. Its two-pronged tongue flicked swiftly, searching for the exact location of its prey. It slowly approached a nest with three chicks and, wham, swallowed them one by one.

It was a huge tiger snake, no more and no less. The tiger snake is a large predator that inhabits the forests of the Canal Watershed and extends throughout the geography of the isthmus. It is extremely fast, moves nimbly and hunts both at ground level and in the trees. Its coloration pattern is variable. Generally, it presents bright yellow and black irregular designs, resembling the stripes of a tiger. This gives it a very efficient camouflage, as it breaks the outline of its figure. 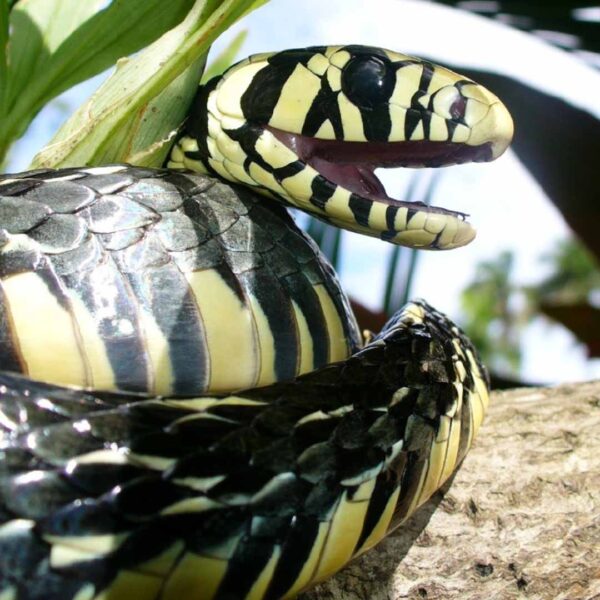 Its most common size is between one and two meters, and its maximum length is 2.6 meters, although some say it can reach up to three meters.

The tiger snake may have an elusive disposition, but in the presence of an intruder, it activates an aggressive defensive display. It shakes its tail rapidly, raises its head, inflates its neck and opens its huge mouth in an intimidating pose. Additionally, it produces a hissing sound, exhaling air from its lungs. And if all this does not scare off the intruder, it will bite several times and chase after it, and may even lash out with its tail. If you encounter one, be very careful, if you don’t act quickly, you may not get away with it!

Scientific name: Spilotes pullatus. The tiger snake is not venomous, but it is still a caution because it can bite with its sharp teeth and cause a serious infection. As it hunts mainly rodents, it is beneficial as a biological control. It also eats squirrels, bats, birds (adults, chicks and eggs), and the occasional frog and lizard. It lays up to 12 eggs and its young are about 50 centimeters long at birth.