The map of the findings - El Faro | Canal de Panamá

The archaeological inspection and evaluation programs began after the beginning of the Canal expansion works, since the need arose for the historical and cultural resources found in the excavation works of this great project to be evaluated by a team of professionals for their study and conservation.

The process of making these evaluations began with the environmental inspectors, who were in charge of informing archaeologists of possible sites.

These programs produced 54 reports describing the objects of value found, the conditions in which they were found, details about their age and the places they came from. The location of the objects was georeferenced. A whole documentation process was carried out to give context to each piece found.

Each of these reports is a window to the past. In them, human settlements of high historical richness are shown, as is the case of the famous “lost towns” or depopulated. Gorgona, Bas Obispo, Bohío Soldado, Emperador, come back to life through the objects obtained in these excavations, and the photographs that show the piles and columns of the buildings of these abandoned villages. In this way, we can have a better idea of what life was like for the Panamanians in those towns.

In some cases, the findings border on the lyrical. In Matachín, a town sadly linked to the collective suicides of Chinese workers in the construction of the railroad, the artifacts found are iron crosses, used in burials since the French period of the construction of the Canal, and found in sediments removed outside the cemetery area. 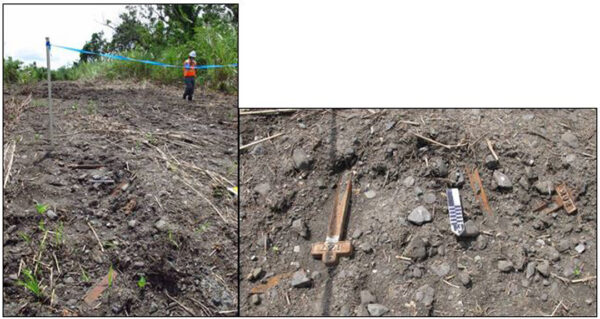 On other occasions, the discoveries are more concrete and punctual. In an area near the Pedro Miguel Locks, workers’ nameplates, iron wheels and engine parts denote the existence of old storage areas and mechanical workshops.

By 2014, while the expansion work was nearing completion, other excavation and dredging projects were beginning to get underway, such as the widening of the Gamboa channel. The staff of the Environmental Division, aware of the importance of protecting the Canal’s cultural heritage, decided to continue the conservation work.

Seeing the cultural wealth that was appearing as the work progressed, the staff of the Environment Division analyzed the best practices for managing the findings. This led to the idea of creating an electronic map. This proposal was welcomed and encouraged by the Historical Memory Unit of the Corporate Affairs Office, which commissioned the Analytical Capabilities Team of the Vice-Presidency of Digital Transformation, with the creation of an interactive map to take advantage of this historical material.

“I felt it was a challenge, as it was a complex topic with scattered information and it had to be made easy to visualize in order to take advantage of all this that had been collected in the expansion.” Rubén Vega, in charge of developing this map.

The result obtained by overcoming this challenge was a tool similar to Google Maps and that gives the precise location of the different objects found during the archaeological evaluations of the Canal Expansion, the attributes of each related finding, and the possibility of seeing the report to which it belongs.

In addition to being a tool for Canal environmental protection specialists, this map is available in the reading room of the President Roberto F. Chiari Library.

It is hoped that in the future, all of these pieces can be exhibited in museums, in facilities within the Canal, or can be preserved as national heritage, and used as historical sources for academic research. At this time, the work of preserving the Canal’s heritage continues. Archaeological discoveries are constantly being made in the operational areas, and the Canal, in addition to its commitment to boosting the country’s economy, is aware of its role as a safeguard of our cultural and heritage assets.