Among the books in the Presidente Roberto F. Chiari Library, one large book stands out. It has no formal title, publishing house, or specific author. The brown color of the edges of the pages and its fragility attest to its age: 117 years. It bears its name on its spine: “Scrapbook containing clippings about the Panama Canal”.

This jewel is a scrapbook containing hundreds of notes from national and foreign newspapers, focused on relevant events of the years 1905 and 1906 of our then young republic.

Why go to the trouble of clipping these articles? At whose request?

Minnesota-born Charles Edward Magoon became the second governor of the Canal Zone in 1905. Magoon succeeded Major General George Davis who, due to malaria, had had to leave the management of the Zone government to Dr. William Gorgas.

Beginning May 26, 1905, Governor Magoon’s main responsibilities within the Canal Zone were, as might be expected, to improve sanitation and to deal with the very common outbreaks of yellow fever and malaria. At first, he denied that the diseases were mosquito-borne because he believed that the native population would have been more affected. However, by January 1906, Magoon had come to understand the role of mosquitoes in disease transmission, as evidenced in a New York Times article in which he addressed in detail criticisms of his administration. By then, he had embarked on a vigorous and ambitious plan to eliminate mosquito-breeding swamps.

While he was governor Magoon, a lawyer by profession, arranged for the publication of an English edition of the Civil Code of Panama, a document he codified as Canal Zone law on May 9, 1904. 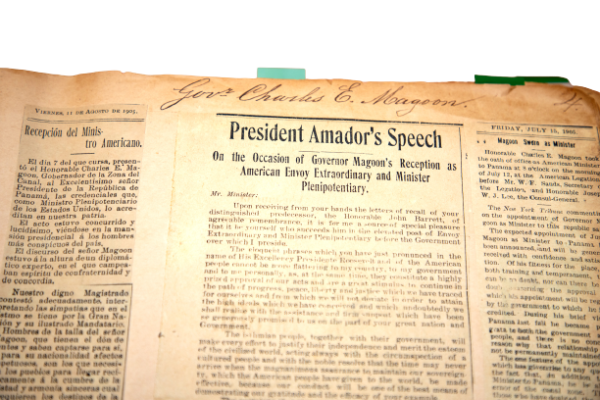 Notes of the time

The purpose of the scrapbook was to give the governor a quick and accurate summary of what was happening in the isthmus. Every morning, the governor’s assistants cut out news items related to the Canal, and these were separated by topics such as sanitary conditions, late payments to employees, the work of the commissaries, immigration, and foreign relations.

The stories varied in size. Some take up an entire page and others are just small clippings. Page after page, the notes show the varied provenance of the newspapers. The New York Herald, Savannah Morning News, Washington Post, Diario de Panamá, Nueva Era de Bogotá, Limon News, Chicago Chronicle, and the Panama Star & Herald, among others, make appearances in the album. It is interesting to note that the newspaper articles published in Spanish have their respective English translations handwritten by the governor’s assistants.

Within this large volume of journalism, the notes on the immigration of workers and their labor status stand out. For example, in many articles, the impact that the implementation of 8-hour workdays would have on the Canal works is analyzed.

A note from August 1905 stands out, pointing out the presence of child labor in the Culebra area and calling for a halt to this practice. On the other hand, the Rigolleto of Barranquilla, in a note dated June 20, 1905, advises the population to ignore offers of work in Panama, to ignore their wages of 8 cents per hour and to always bear in mind the unhealthy conditions characteristic of the isthmus.

The resignation of the first chief engineer in charge of the construction of the Canal, John Wallace, receives special emphasis, as well as the search for the normalization of relations between Colombia and the United States. 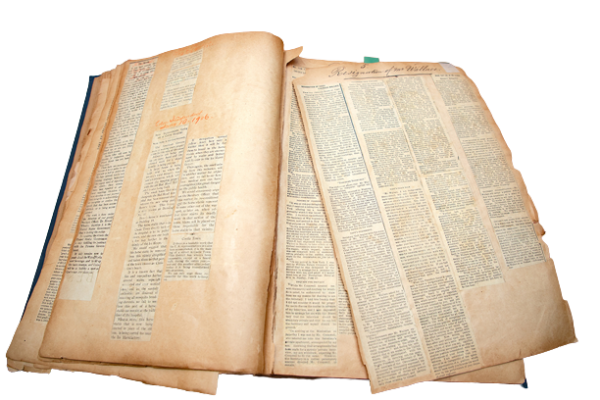 At the end of the album are notes detailing Magoon’s appointment as lieutenant governor of the Philippines, then under U.S. control. A note from the Star & Herald newspaper, dated August 11, 1906, highlights the distress this news caused in the isthmus. The governor was very popular, since “he had won the affection of all classes” and that “he was leaving the isthmus without having made a single enemy”.

Curiously, the book does not end with the news of its owner’s farewell. On the last page, perhaps out of the sense of duty of some assistant or secretary eager to save history, there are articles from the Panama Journal and the Colon Starlet, dated November 20, 1906, detailing President Theodore Roosevelt’s visit to the isthmus. This was the first time in history that a sitting president left the United States for an official visit. It was worth remembering.

Saving history, one book at a time

On June 7, 2022, the Library was visited by staff from the National Archives, led by its director, engineer Gustavo Cerrud Sáenz. While reviewing the historical collection, they came across the scrapbook, noting its delicate condition. Cerrud Sáenz recommended transferring it to the Archives’ conservation and restoration laboratory, which has state-of-the-art technology to deal with such cases. The album will undergo a process in which acids and harmful materials will be removed; then it will be cleaned and washed; finally, each page will be duly laminated to be pressed again. In the coming months, the book will be ready to be reintegrated into the Library’s collection and will be available electronically.

The Library works together with different educational and cultural institutions for the preservation and promotion of the Canal’s documentary heritage. It collaborates with the National Archives, the University of Panama, the Biomuseum, the Interoceanic Canal Museum, the Smithsonian Tropical Research Institute, and the Ernesto J. Castillero Library, among others.

The Canal’s historical documents may be consulted in person at the President Roberto F. Chiari Library located at the Ascanio Arosemena Training Center (Balboa) from 7:00 a.m. to 3:30 p.m., Monday through Friday.