Among the geographical points of the Panama Canal, Cucaracha is an area located on the eastern slope of the Culebra Cut, very relevant since the time of the construction of the Canal for being associated with landslides. Gigantic were the efforts and strategies of those who had and still have the task of managing and controlling this geodynamic phenomenon. But the subject of our story belongs to a different category; it is a huge insect, a wild six-legged “cockroach”.

It has nocturnal habits, it is omnivorous. In addition to dung, it feeds on fruit and even adapts to artificial diets. It measures about 9 centimeters (more than twice the length of a common cockroach), and is the second largest cockroach on the planet. In some places, this and other cockroach species are listed as exotic pets, and are also used as food for other insectivorous animals. 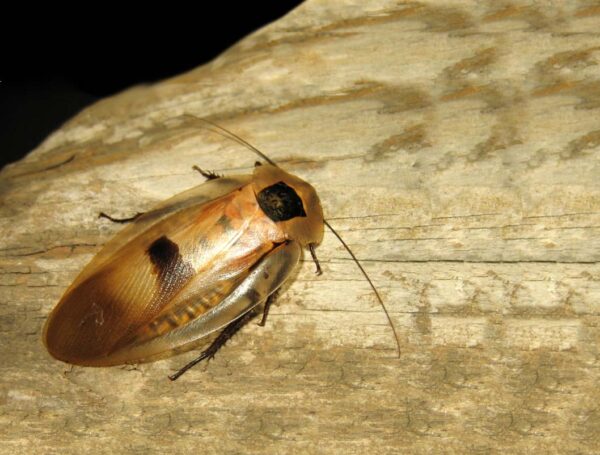 There are some 4,600 species of cockroaches scattered over all continents except Antarctica, and they are not necessarily a topic of conversation outside the scientific field. In our forests there are a wide variety of cockroach species, including the enormous giant Blaberus cockroach, whose name appears on the list of the world’s largest insects. It has a primitive appearance, especially during the immature stage. It was first described in 1758 by Carl Linnaeus, botanical naturalist explorer, zoologist and renowned creator of the scientific classification and binomial nomenclature of living beings.

Some call it the giant wood cockroach, because it usually hides in decaying wood. It grows in damp, dark and warm environments such as hollows and crevices in logs or rocks. In the shady interior of the caves of Chilibre, between the humidity and the smell of mold, inhabits a colony of Blaberus, favored by the ideal conditions of feeding and housing. They are excellent recyclers of nutrients, as their menu includes bat dung and frequently available carrion.

Cockroaches have been roaming the cracks and crevices of the planet since before the dinosaurs, approximately 350 million years ago. They are so tenacious that they can live without food and water for a long time, and their resistance to nuclear radiation is far superior to that of most vertebrates. In 2007, a satellite carried a group of cockroaches into space as part of an experiment conducted by Russian scientists. The interesting thing was that one of them, named “Hope”, became the first terrestrial living being to give birth to 33 babies conceived in outer space.

Undoubtedly, the giant Blaberus cockroach is an interesting little-known insect and is part of the immense biological wealth that inhabits the protective forests of the Canal.