The Lineated Woodpecker is a native avifauna species, widely distributed in the Canal watershed and other surrounding wooded areas. 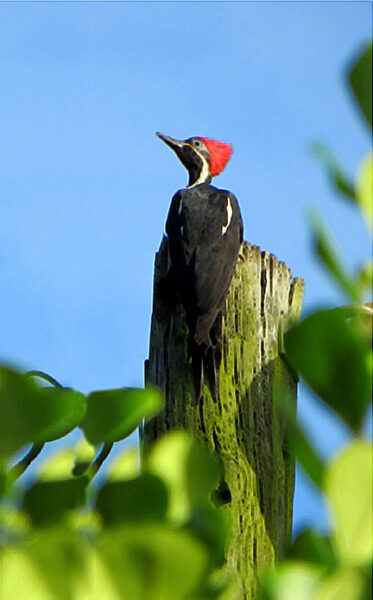 Its scientific name is Dryocopus lineatus. It is a large bird, about 35 centimeters long. The back of its body is black and has two white lines on its wings and on the sides of its neck, the unmistakable markings of the lineated woodpecker. What stands out most about this bird is its head crowned with a prominent red crest.

The woodpecker needs large tracts of forest for its food. When perching, it clings to the bark of trees with its strong legs. The tail feathers act as a third point of support and help it maintain its balance. 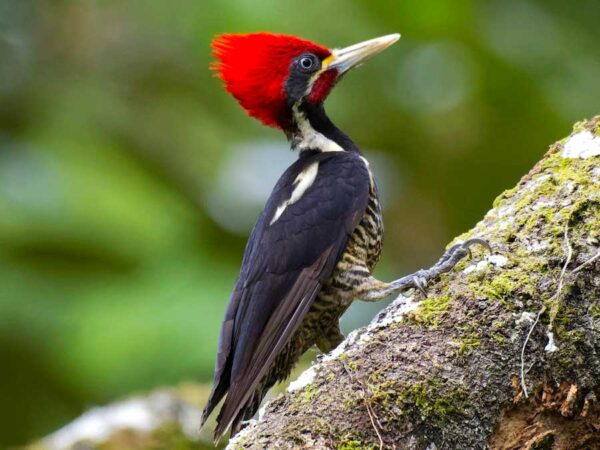 The most unique part of its anatomy is the powerful beak with which it drills solid wood with ease and dexterity. With this natural instrument, it pecks through the bark in search of food. It frequents guarumo trees because there, it can devour delicious ants. Its diet consists of insects and the occasional seed or fruit. With its beak, it also builds large cavities in live or dry wood, which it uses as a nest for its young. The breeding season usually occurs between March and April. The pair chooses the tree, which could be a corotu.

They lay 2 to 4 eggs and both parents participate in the incubation.

It can be seen alone or in pairs in the middle and upper strata of trees and palm trunks. It tolerates very well disturbed areas, so it is not strange to see it in fragments of secondary forests, wooded margins of towns, farms and other human settlements. When we do not see it, we notice its presence when we hear a drumming sound that indicates that the woodpecker is pecking the wood of the trunks.