The volatility and uncertainty of the weather continues to surprise us. During this year, the Northern Hemisphere has recorded record winter temperatures in regions such as Europe and Asia, while last year, Europe recorded the warmest winter in its history, northeast Asia had a warm winter and Panama had a rainy season with less precipitation. This recent cold weather brings as a consequence an increase in the commercial exchange in the energy markets and its transportation worldwide to meet the heating demand of the residential and commercial sectors in the Northern Hemisphere, among these, liquefied natural gas (LNG).

The price of LNG has experienced a historical rise as shown in the graph, which shows the average spot import price in Northeast Asia, which concentrates the main gas consuming countries in the world, such as Japan, South Korea, China and Taiwan. Also shown on the secondary vertical axis is the daily charter of LNG-carrying vessels from January 2020 to the first two weeks of January 2021.

LNG traded at low prices on the order of $2.00/Mmbtu (million British thermal units) during much of 2020, due to decreased demand as a result of the impact of Covid-19, due to isolation measures to contain the spread of the virus. These regulations caused the cancellation of shipments at LNG export terminals in the United States, resulting in the curtailment and temporary closure of natural gas export plants in North America and the Asia-Pacific region. During this period, LNG carrier charter rates were at lows of $35,000/day and averaged $65,000/day. However, by the end of 2020 and January 2021, both the LNG price and daily vessel charter rates have skyrocketed tenfold to a total of $20/Mmbtu and $350,000/day, respectively.

According to analysts at the consulting firm Tudor, Pickering, Holt & Co (TPH), on January 14, 2021, LNG supply reflected a reduction of approximately seven percent, so that, with increased demand in Asia resulting from the extreme winter, it drove LNG imports and prices in this region to record levels, causing high cargo repositioning.

This situation limited the supply of LNG carriers in the spot market in the Atlantic region, mainly in the Gulf of Mexico, affecting their availability and raising charter rates to record highs of $350,000 per day, as reported by Argus in publications on January 11, 2021.

LNG and the Canal

On the other hand, the Panama Canal is an important link for shipping and energy trade, especially for the countries of Northeast Asia and the U.S. East Coast and Gulf of Mexico, where more than 98 percent of North American LNG liquefaction and export capacity is located (see illustration). 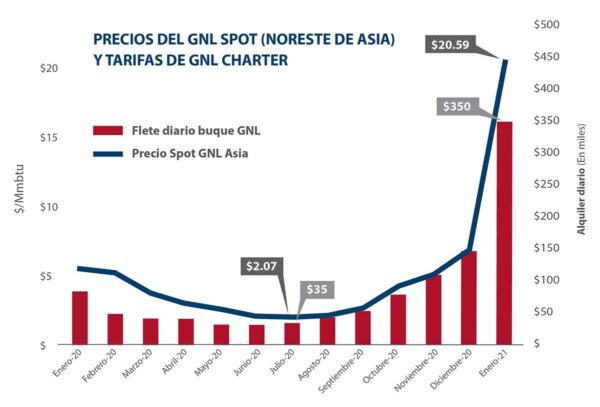 Parallel to the turbulence in the energy markets, the Panama Canal has seen a significant upturn in traffic over the past few months, coinciding with the high demand seasons for the container ship, LNG and liquefied petroleum gas (LPG) segments, so in order to accommodate the increase in demand, The waterway has made operational adjustments, increasing the number of crews and maintaining its safety protocols, in order to allow more daily transits for vessels arriving without reservations.

As a consequence of the increase in arrivals and transit wait times, the Canal implemented a series of measures modifying the reservation system for Neopanamax vessels as of January 4, 2021, which allow LNG vessels to have more availability to reserve a transit slot within 80 to 15 days prior to sailing the waterway. Prior to this modification, only one of the two spaces offered during the period could be allocated to an LNG carrier.

In addition, any space that becomes available within 3 to 2 days prior to transit for Neopanamax vessels is offered through an auction process. Since the modifications were implemented on January 4, we have conducted 12 auctions of which 5 have been awarded to LNG carriers.

Recent publications estimate that the high demand for LNG may extend until March 2021, when winter ends in the Northern Hemisphere, so the situation of high arrivals in the Canal, especially energy, could continue in the short term. As a consequence, the stabilization of LNG prices is already beginning to be noticed with spot futures in Asia for March deliveries of approximately $9.47/Mmbtu, as published by Drewry on January 18, 2021. In turn, reactivation of LNG supply is also expected in the coming months, especially in the Asia-Pacific region, which would add more gas supply.

This situation of current LNG prices being higher than future prices is known as a market in backwardation, and is one of the reasons why many LNG carriers are trying to take advantage of the price boom, rushing to place their cargoes in the Asian markets. While it is true that the year 2021 has begun with great challenges for the Panama Canal, our resilience in the face of these situations will prevail in the same way that we have ensured the continuity of our transit service in the midst of the pandemic.

The author is a Business Intelligence consultant.