The barred batará is a songbird that belongs to a very diverse family of birds known as “antbirds” and which are exclusive to the neotropical rainforests. 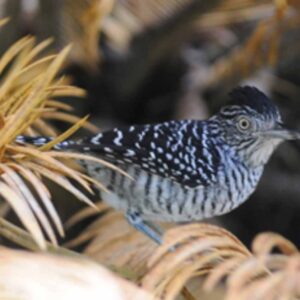 This species presents a marked dimorphism in its coloration, so much so that the male and female may appear to be different species. The female exhibits brown and ochre shades, while the male has thin alternating black and white stripes. Both have a restless topknot that they frequently display while hopping from twig to twig.

Forest edges They often search for insects to feed on, hopping through the thickets at the edges of the Canal forests and surrounding areas. They move nimbly among the bushes. Sometimes it is difficult to see them, but their unmistakable song can be heard from a distance when the pair communicates. As they move, the male sings, the female answers and they continue to perform a simple choreography, accompanied by a repeated series of rapid notes that echo over and over again among vines, branches and foliage.

Their range can extend to less forested areas and we can observe them browsing in the shrub gardens of urban and suburban areas, in contact with wooded blocks and green corridors. 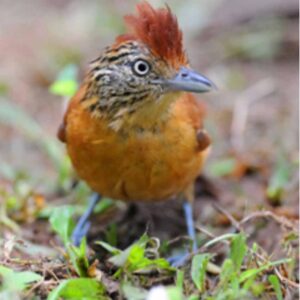 Their nest is made of a mixture of thin plant fibers arranged very neatly. They usually hold it very discreetly between the angle of a twig, trying not to attract attention. Their eggs are white, dotted at the thickest end with brown spots and dots of varying intensity and purple tones.

The barred batará, whose scientific name is Thamnophilus doliatus nigricristatus, is a small jewel of the rich ornithological fauna of our country.