Shirley Binder is a marine biologist specialized in public administration. She is an advisor to the Ministry of Environment on technical and international issues. She is part of the first cohort of Edinburgh Ocean Leaders. She is in charge of the Convention on International Trade in Endangered Species of Wild Fauna and Flora (CITES) to be held in Panama in November 2022. 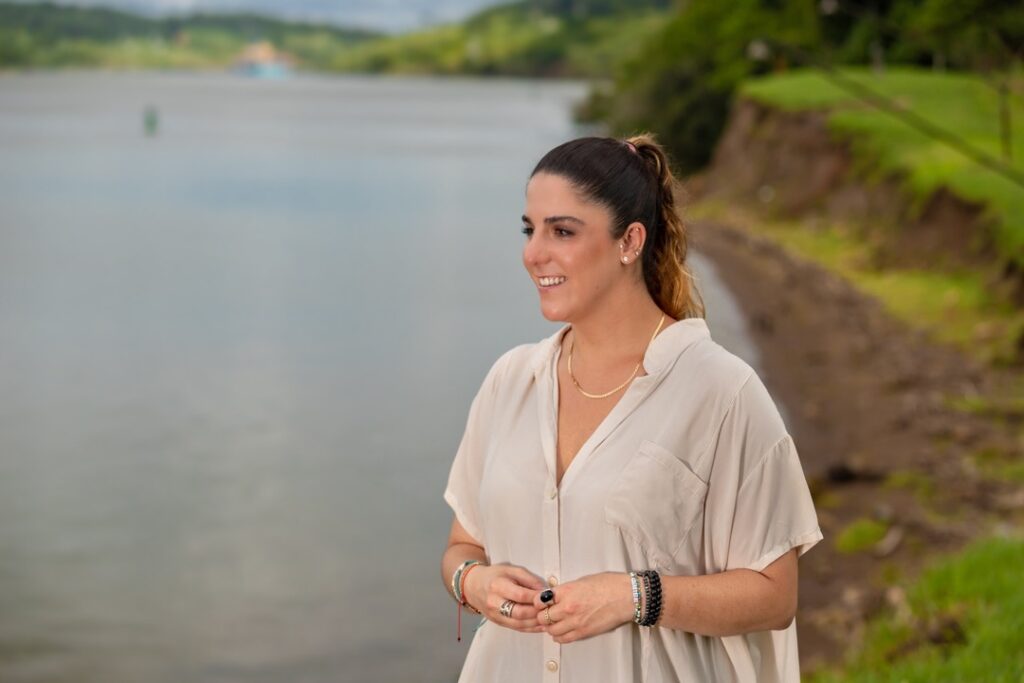 What was the moment in your childhood that defined your future?

I grew up playing among the rocks on the Pacific beaches of Panama and that’s how I fell in love with the sea. When I was eight years old I asked my mom to let me dive and that changed my life.

What is the canal experience you remember most?

I made a transit as a child and the descent of the boat into the chamber, I was very impressed.

What is your favorite place in Panama?

How has your mission changed?

When I was studying marine biology, I dreamed of going into research. But I had the opportunity to work with the Mar Viva Foundation and the Smithsonian Tropical Research Institute, and I realized the importance of public policy and the use of science in decision-making. I knew that would be my forte.

How does the Panama Canal impact your mission?

The Canal benefits the country because it contributes a lot to conservation. The protection of its watershed supports the marine ecosystem, since this care prevents the tributaries from contaminating with plastics and sediments. The Canal has put on the map the issue of maritime traffic management and the passage of humpback whales; it is a worldwide example.

What is Panama’s most important feature?

Our two oceans. Favorite Panamanian festivity The Parade of the Thousand Polleras. The beauty of the art of the pollera always amazes me. It also gives me mixed feelings because you see so many tortoiseshell combs, fortunately old ones. This hawksbill comes from turtles that today are already protected, because they are in critical danger of extinction. Panama has one of the largest populations of this species in Coiba National Park.

The expansion of Panama’s marine protected areas. We went from having 13.7% of protected areas to 30%, and we also promoted environmental diplomacy, because countries in the region did the same. I am proud to have strengthened the park rangers: we improved their infrastructure and provided them with technology.

I am responsible for the Convention on International Trade in Endangered Species of Wild Fauna and Flora (CITES) to be held in Panama in November 2022. Panama’s proposal will be the inclusion of the Carcharhinidae family. This listing sets the trade of this species to be sustainable and legal. Its conservation is essential, as the shark is to the sea what the jaguar is to the land.

Role models in her life

Marine biologist, explorer and author Sylvia Earle; she has been my heroine since I was a child. Also Maximiliano Bello, Sylvia’s successor, an expert in international ocean policy and a great supporter of Panama.

Climate change is already here. In Portobelo and Guna Yala, for example, we have already lost land. This is an environmental and human disaster.

What is its origin?

I am a Panamanian-Israeli. My grandparents moved to Panama when they got married and the family grew up here. My Hebrew roots have Sephardic and Ashkenazi ancestors. Because of both cultures, Panamanian and Israeli, I am a person who, when I set goals, persists until I achieve them.

La rosa de los vientos. It reflects the resilience of the Panamanian people.