The reaction of fear when encountering any snake is natural. In the case of corals, we are well aware that they are venomous. This amplifies the concern of being bitten by one. Indeed, corals possess a potent neurotoxic venom.

Annually, some 2,300 cases of ophidian bites are reported in the country. 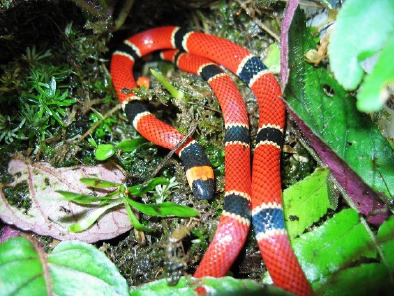 Of this total, only 2 to 4% correspond to coral snake bites reported at a hospital level.

Corals are short, slender and nocturnal snakes, but they may be active during the day. They are not aggressive. They are small-eyed and small-mouthed and have two tiny fangs. Their body color depends on the species, but they are generally a striking dark red with yellow and black interspersed rings.

The question is: What is the order of the colors? Generally, the order is red-yellow-black-yellow, and it repeats.

There are several species of coral in the Channel forests. One of the most common is called Micrurus nigrocinctus. On its body, the yellow color has rather whitish shades.

False corals are also present in our forests, although they are very similar to true corals and are not poisonous.

During the hot hours of the day, corals take refuge in dark, cool places among tree roots, logs, stones, leaf litter and burrows. They occupy a wide variety of wild habitats, such as riverbanks, streams and swampy areas, and may venture into cultivated areas near forests. When it feels threatened, it hides its head under its body and raises the tip of its tail, wagging it to attract attention to its limb. As soon as the threat disappears, it quickly escapes to safety. It is recommended to use personal protective equipment when engaging in activities in wooded areas, and never attempt to approach or handle a wild animal.