The night was darker than the wolf’s mouth, only the chirping of a couple of crickets on the banks of the Pequení River could be heard. In a flat backwater, with some undergrowth, there is a swampy pond and beyond it, a trunk with thick roots. A mysterious sound came from inside it, as if a strange creature lived there. Indeed, it was the lair of the bullfrog. 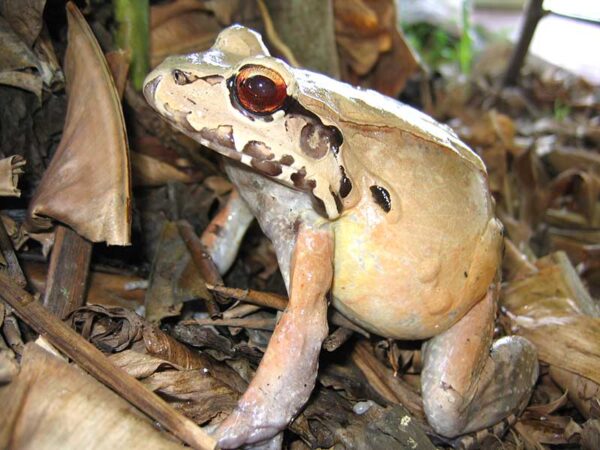 The Central American bullfrog is a huge amphibian that lives in our forests. We hear it a lot in the sub-Watershed of Lake Alhajuela, but it is widely distributed. It is as large as a common toad. The female measures about 18 centimeters.

The first rains in May trigger her reproductive behavior in the humid jungle. The male sings at night to attract females to his territory. Often, you hear him but don’t see him, because he may be hiding a kilometer away. The female lays up to a thousand eggs in a thick white froth, on the edge of a marshy pond or in a puddle flooded by rainfall. After a while, the voracious tadpoles hatch.

They feed on plants and organic matter, although they can also eat their peers and eggs from the same nest. These tadpoles are resistant to dehydration. If the puddle dries up, they take refuge in the mud waiting for torrential rains to move and continue their life cycle. However, if it does not rain for more than 6 days, the tadpoles perish.

Rainfall in the Canal Watershed feeds the rivers that supply water for human use and transportation, but it is also a fundamental basis for complex amphibian life cycles. It is vital to the survival of species such as the Central American bullfrog, which depends on it to survive generation after generation in these forests full of biodiversity and teeming with life thanks to the water.

– Its scientific name is Leptodactylus pentadactylus.

– It is called Central American bullfrog and calf frog. In its adult stage, it feeds on everything that moves, from bird chicks, other frogs, crustaceans, snakes, worms, crickets, cockroaches, beetles, millipedes and also spiders and scorpions. Their skin produces an irritating and sticky substance to protect themselves from their enemies. Among its predators are: snakes, “gatosolos” and crocodiles.