At 9:20 a.m. on the cloudy morning of Thursday, April 28, Canal TV and El Faro arrive at Madden Dam in the Chilibre district to document scheduled maintenance work. It is the same team from the Maintenance of Gates, Locks, Dams and Spillways section that we observed weeks before when they were carrying out similar works at Gatun. 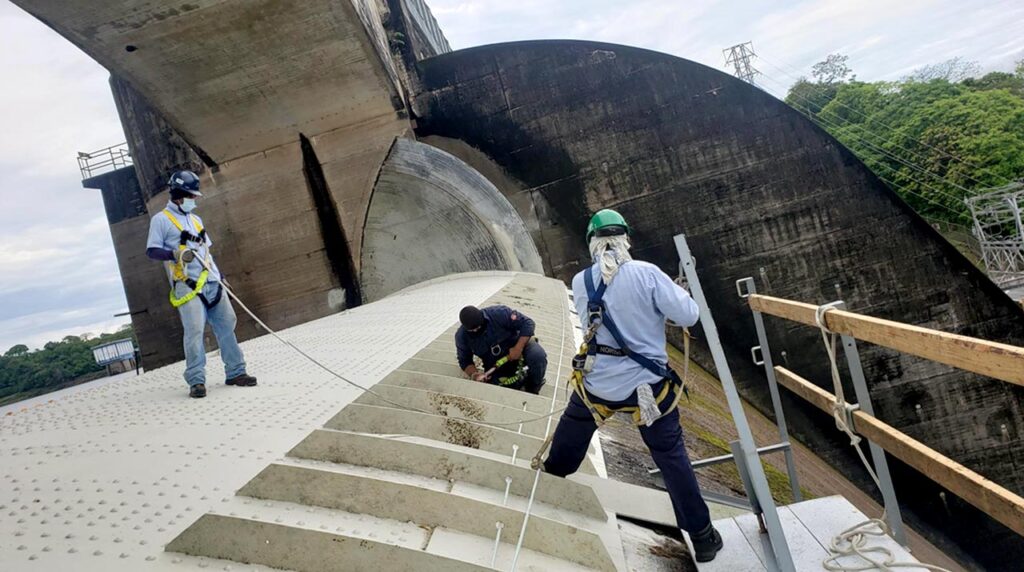 We began our conversation with José Bonilla, who has been working at the Canal for 18 years, and for the past 24 months has been interim foreman in the Dams and Spillways Unit. Before joining the Canal, he worked as a welder-assembler at the Braswell Shipyard in Balboa, located at the Pacific entrance of the interoceanic waterway.

Bonilla verifies that the water inlet valve of the lake has the closing label to be able to empty the pool.

“Once, when I went to get the register of eligibles they told me, ‘Look sir, you are eligible, but you have bounced like three times from your mail.’ So I started again to apply knowing that I was eligible, until I was called one day, and I didn’t believe it,” Bonilla recounts.

He went to take the respective tests, which he passed, and was hired as a shipwright for the construction of the Barú barge.

“Working at the Canal is a source of pride for me, because it is one of the most solid companies that gives the country a boost,” he says.

Each maintenance project successfully completed by the Dams and Spillways Unit is a source of pride for José Bonilla and his colleagues. The optimal operation of these facilities translates into savings of water, the natural resource that drives the Canal.

Bonilla says that in ten years he sees himself “passing through the retirement window,” but before that, he will continue to work “for home plate,” satisfactorily delivering each project to earn the position of foreman.

Thus, he sends a message to his fellow Canal workers and to Panamanians who aspire to join the waterway’s labor force. To the former, he asks them to take advantage of the opportunities that the Canal offers, and of which he is a living example. “You have to train to be prepared to be able to compete,” he said.

To those aspiring to a job in the waterway, Bonilla asks them not to lose hope and to keep applying, because “he who perseveres, triumphs”.

We then approached José Córdoba, a sheet metal mechanic, while he was working on the bronze seals that guarantee that no water will leak into the floodgates. There he was, tape measure in hand, in a kind of hangar. He is a man with tanned skin, for, although this time we caught him indoors, much of his work, he carries out under the sun.

“I am grateful to God for having allowed me to serve the country through my work here at the Canal, because at the same time, this job has allowed me to support my family and prepare them for the future,” says Córdoba, with visible enthusiasm.

He adds that in 24 months, when he turns 62, he will retire. He takes with him 34 years of service with the satisfaction of the work he has done alongside his colleagues in the different departments such as tugboats, dams and landfills, and in “la Industrial”, where he started.

“I tell the guys who are entering the Canal that it is very important for them to be sure about what they want to learn and do here, because since this is unique and cannot be seen outside, they must be careful to learn it well, because the continuity and efficiency of the Canal depends on their work,” concludes José Córdoba.

He was born and raised in the district of La Chorrera, where he has forged a home with his wife and two children, both professionals.

He joined the Canal’s labor force on February 16, 2004, as a ship owner. He later graduated as an Industrial Engineer from the Universidad del Istmo (UDI).

Born in the western part of the province of Chiriqui, married, father of two children, now professionals.

Graduated in 1988 from the former Apprentice School of the then Panama Canal Commission (PCC), as a Tinsmith Mechanic (Chip Metal). With 34 years of Canal service, he is two years away from retirement.

About the maintenance of the gates

The maintenance work on the Madden dam, which has four drum gates, began on April 4. During this time, interior and exterior maintenance will be performed on the gates, including the replacement of the screws and their respective threads, as well as 250 bronze seals on the hinges of the drum gates to ensure that there is no water leakage.

All this work must be done while the water level is maintained at a maximum height of 226 feet, since the hinges of the gates are located at 230 feet and above.