The Panama Canal closed its fiscal year 2021 (FY21) with a record-breaking annual tonnage of 516.7 million Panama Canal tons (PC/UMS), coming in 8.7% higher compared to the 2020 fiscal year (FY20) and 10% above tonnage registered in FY19, the waterway’s last pre-pandemic fiscal year.

“I am grateful for and proud of our world-class workforce, whose resilience and dedication allowed us, throughout the pandemic, to continue providing a service of excellence and enabling the uninterrupted delivery of essential goods around the world,” said Panama Canal Administrator Ricaurte Vásquez Morales.

“This commitment was key in our ability to manage a record tonnage, which reinforces the Expanded Canal’s value to global trade after five years of successful operations.” 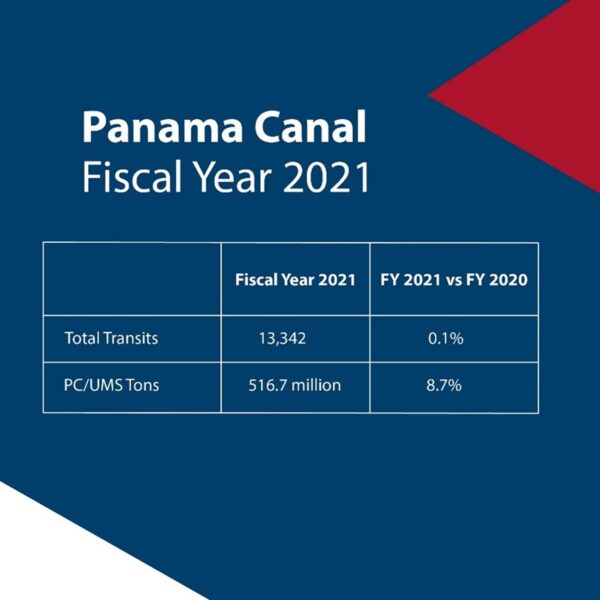 LNG carriers registered a 31.4% increase in tonnage through the Panama Canal, representing the largest gain across all segments. LNG also set new annual records for total tonnage and transits, in addition to monthly tonnage and transit records in January 2021, fueled by record winter temperatures in Asia. More LNG terminals located in in the Gulf Coast and the East Coast of the U.S. expanded their operations, spurring an increase in exports shipped to Asia.

“LNG is not only growing the fastest, but it has had its best year in terms of tonnage through the Canal,” said Ilya Espino de Marotta, Deputy Administrator of the Panama Canal.

“However, this year’s figures across segments demonstrate the Canal can adapt and meet fluctuating market needs, as shown earlier this year, when we modified the Panama Canal reservation system to offer our customers additional booking options and flexibility.” 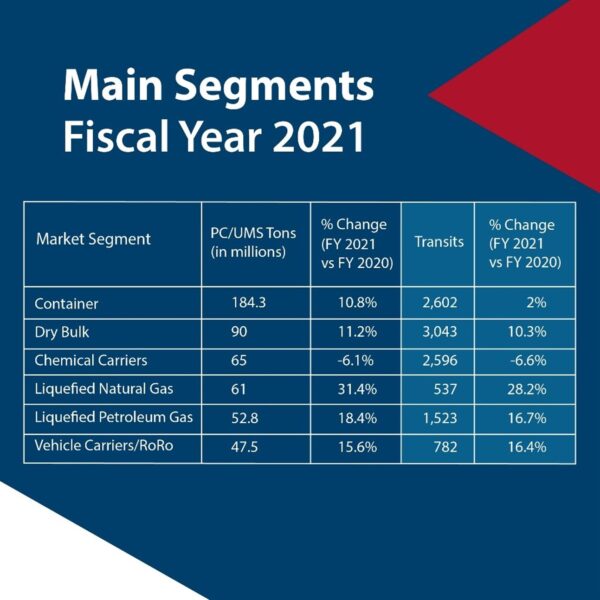 LPG and vehicle carriers followed LNG in segment growth, closing FY21 with an 18.4% and 15.6% increase in tonnage through the waterway, respectively. While the latter saw growth in FY21, vehicle carriers are yet to fully recover from the pandemic-driven dip in traffic, similar to passenger vessels, which are expected to continue their gradual return to the waterway in FY22. Their return will be supported by proposed modifications to the segment’s tolls, which are expected to be approved in the coming weeks. 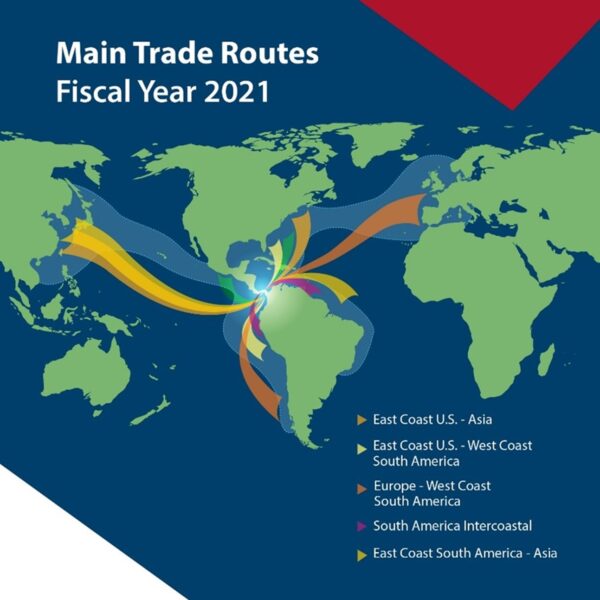 All in all, the Panama Canal recorded a total of 13,342 transits in FY21, driven by an increase in Neopanamax transits. Though their average size increased, Panamax transits declined in total, an anticipated shift accelerated by the impact of the COVID-19 pandemic, as shipping lines consolidated more cargo onto larger ships to decrease frequent transits. To help facilitate this transition, the Panama Canal increased the maximum allowable length (LOA) for vessels transiting the Neopanamax Locks, a move made possible by the waterway’s experience operating the Expanded Canal. The waterway also began offering a 50-foot draft, the highest level allowed at the Neopanamax Locks. Achieved through effective water management and an increase in rainfall, the higher draft ultimately increased the waterway’s capacity to maneuver larger and heavier vessels.

Looking Ahead – Securing a Sustainable Future

The Panama Canal also advanced its commitments to accelerating the decarbonization of shipping in FY21. In January 2021, the Panama Canal announced the creation of the CO2 Emissions Dashboard, which calculates the carbon dioxide (CO2) emissions saved by vessels that choose to transit the Panama Canal over the most likely alternative route. Building on these and other longstanding efforts, the waterway then committed in April 2021 to becoming carbon neutral by 2030, with plans already underway to invest roughly $2.4 billion in modernizing its equipment and infrastructure to meet this commitment. The Canal will also spend $2.8 billion in maintenance, as well as $500 million in digital transformation initiatives to maximize its capacity and value offered to customers for years to come.

The Panama Canal is working on its roadmap outlining the specific steps it will take to reach carbon neutrality by 2030, from generating electricity from renewable sources to migrating the Canal’s fleet to electric vehicles and hybrid tugboats. The Canal will also explore a pricing strategy that promotes the efficiency and low-carbon emissions of the ships that transit the waterway, as well as participate in the upcoming 2021 United Nations Climate Change Conference (COP26) and IMO Marine Environment Protection Committee (MEPC77) meetings.