"Our main strength was believing in ourselves." - El Faro | Canal de Panamá

Nicolás Ardito Barletta enjoys the goodness of being over 80 years old. He speaks slowly and never loses his concentration. Today, 44 years after the signing of the Torrijos-Carter Treaties, he grants El Faro the privilege of his memories.

Perhaps due to the influence of a family business, young Nicolás started out as an agricultural engineer, but he soon realized that he was not a man of the countryside, but a man of the city.

He made the decision to switch to the philosophical side of agriculture to study economics at the school with the most Nobel Prizes in that social science: the University of Chicago (Illinois, USA).

He felt that there had to be a solution to inequality because, coincidentally, it is in the countryside where its ravages are most visible.

But 83 years are many chapters, and from that moment when he decided to change his destiny, the grandson of an Italian immigrant held in his hands the destiny of the new country.

How does he see his vision as an economist materializing in the year 2021?

First, in the pride of the Panamanian people that all the territory is ours and that the Canal is administered by Panamanians.

There is a symbolic benefit that makes all Panamanians proud to be able to provide a quality service to the world.

A second economic benefit is the one that comes into the country and is used for national development.

What have we achieved as a country?

That through the national budget we have invested in expanding health and education. This service we provide to the world yields abundant socio-economic benefits that bring to the National Treasury much more than just money.

We were able to have a banking center, expanded ports, hydroelectric plants, a Free Zone [of Colon], many businesses around the Canal, and finally, the incorporation of the areas of U.S. military bases to Panama.

Protected areas were created to avoid deforestation and degradation of the forest cover of the Canal watershed, and in 1997, a law was passed to protect the zoning of reverted areas.

What do you consider to be the greatest economic achievement of the Torrijos-Carter Treaties?

In the negotiations, we managed to get 30 cents for each ton of transit through the Canal; but I included an inflationary clause that would allow us to maintain the real value of that payment over the years. This brought substantial benefits: we received 65 cents per ton at the time of the transfer. I remind you that from 1914 to 1977, Panama received 62 million dollars from the operation of the Canal, but from the signing of the treaties until 1999, we received 1,750 million.

After the year 2000, Panama began to receive a significant amount every year. There was the economic benefit of a world-class company.

And now, how do we face the future?

However, we have to make a greater effort to incorporate more people to development.

In your opinion, what is the most important point of the Torrijos-Carter Treaties?

The most valuable philosophical point is the one that elevates the ownership of the Panama Canal and the resources emanating from it to the level of a Constitutional Title. This gives it security and permanence.

The creation of an autonomous Panamanian institution, with a board of directors that is renewed little by little so that it is not controlled by any politician, is the fundamental aspect of Chapter I.

Is there anything you would have done differently?

Given the circumstances, I don’t think we could have done anything different from what was done. All the years I was Minister, I had the opportunity to act as an economic professional and support the two objectives that Omar Torrijos had: first, to recover the Canal Zone and, second, to incorporate the poor and marginalized into national development. That was what could be done at the time.

What tool did we use to move the whole country forward, not just the Canal?

Panama’s connectivity is its main advantage. Panama is characterized by its maritime, financial and telecommunications connectivity, its electrical connection with Central America, its air hub, which are part of the work to better integrate the country.

Panama also has an agricultural opportunity that can be further developed to incorporate its farmers, so that we are not just a transit zone dragging down the rest of the country.

From your beginnings as the designer of that development until today, what is your greatest satisfaction?

The greatest satisfaction for me has been the vision of what Panama could be and seeing how the stages of that vision were fulfilled. Perhaps I was impatient on more than one occasion.

What was the most important characteristic of that team of negotiators?

I will tell you an anecdote. When we visited the German Prime Minister, who was a very straight forward guy, he asked Torrijos how many Panamanians there were in Panama. Omar replied 1.8 million. “And you make so much noise?” the German said. 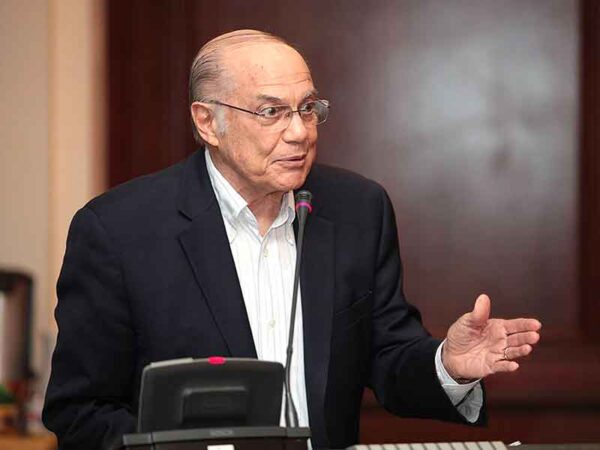