On April 8th, the replica of the Nao Santa Maria crossed the Panama Canal. More than 500 symbolic years of history of this vessel traversed northbound through the Miraflores, Pedro Miguel and Gatun locks. 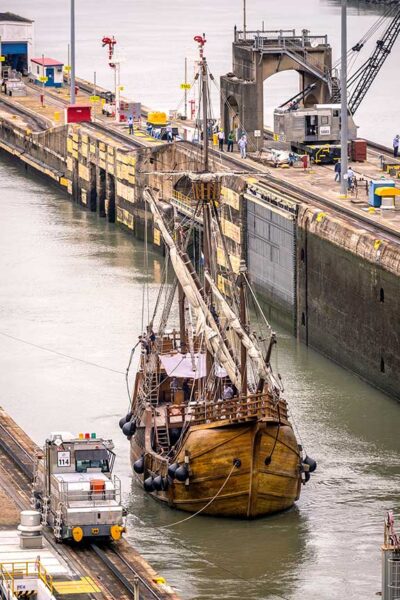 This replica of Christopher Columbus‘ captain ship was built by the Victoria Foundation as part of the 525th Anniversary of the Encounter between Two Worlds (2017), and travels the planet sharing the vehicle of history that united the destinies of many people.

“I loved the experience, very surprising. The way the ship stays on course entirely downwind, had a huge influence on Christopher Columbus’ voyage.”

“The modern adaptations are very subtle, it is a ship that is piloted very physically. I was very impressed by the rudder mechanism. It was a legendary experience.

“One realizes what a mammoth work the human being is capable of doing to connect the two oceans. We were able to appreciate the good maintenance of the locks and the good performance of its workers. The transit through Gatun Lake was a moment of peace and tranquility”.

The contrast of the modernity of the Canal with the replica of one of Christopher Columbus’ ships makes us wonder what the admiral would think if he could travel back in time and see all this… Without a doubt, he would say that the Panama Canal is a true marvel.