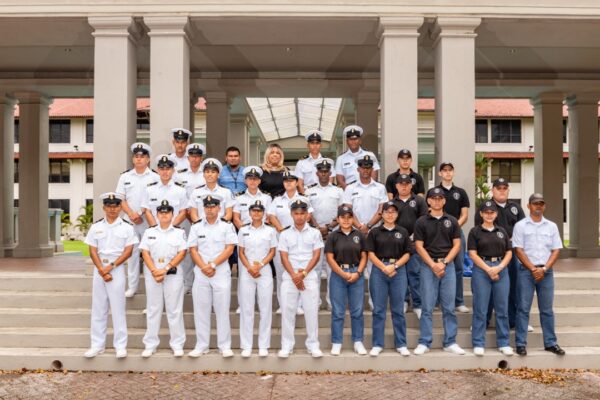 Emerging from the isolation caused by the COVID-19 pandemic, some 250 maritime high school students visited Panama Canal facilities of interest to their future careers.

The young people, decked out in their characteristic uniform, began their tour at the Scale Vessel Maneuvering Center where they observed how the navigation maneuvers performed in the Panama Canal are practiced.

Irving Chiquilani, instructor of the Maritime Training Team, welcomed them with an overview of the training offered to employees who drive ships through the Canal. In this part of the tour, Chiquilani and the Center’s instructors showed them how phenomena such as fog, winds, currents, among others, are reproduced there. In the second part of the tour, the students moved to the Ascanio Arosemena Training Center to hear lectures on the importance of water and how to apply for maritime jobs at the Canal.

“The Canal has unique characteristics in the world, so the training here is based on experience,” the instructor noted.

The groups alternated to visit the audiovisual mathematical simulator with a 360-degree experience. Irving Chiquilani has worked on the Panama Crece program, a plan that trained some 600 maritime high school graduates, of which some 400 young people went on to work at the Panama Canal.

Zaymon Alberto Colpas studies at Gatuncillo High School in Colon and met up with an old friend during his visit. José Checa, a sociologist specializing in watershed issues, has known Zaymon since he was a child. Checa has worked on flood risk control programs in the Santa Rosa and Guayabalito communities (Colón) where entire families participate.

“When I was 10 years old my community was flooded during the La Purisima storm and since then I participated in all the drill exercises. I was also in the Guardians of the Watershed.”

Colpas has always been fascinated by boats and has just been accepted to Panama International Maritime University to study nautical engineering.

Angie Best is a student representative at the Melchor Lasso de la Vega College of Arts and Crafts and dreams of becoming a maritime lawyer.

“When I decided to take this baccalaureate, I set out to achieve what I had been told I could not. On this visit we are the 25 best students of the school,” explained the young woman.