It’s one of those stories you read about in adventure books where a group of intrepid people circumnavigate the globe to test some new invention.

This particular adventure began almost four years ago, in June 2017, in Saint Malo, France, under the vision of a group of maritime and engineering professionals, with the challenge of testing the first autonomous boat capable of extracting its energy from nature while preserving it.

The boat bears the name Energy Observer and was built from a catamaran, but with technologies that require only renewable sources, such as hydrogen, solar, hydro and wind energy. 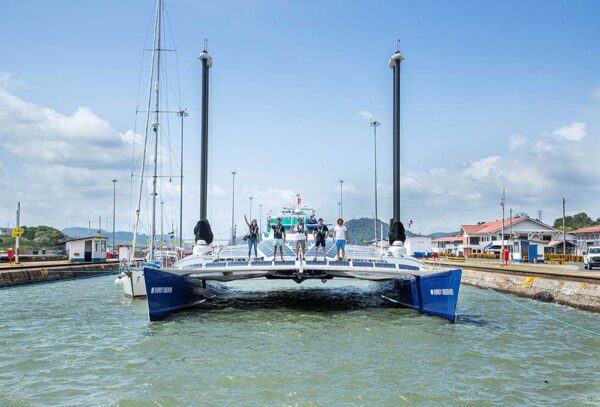 “The Energy Observer is a vessel that runs 100% on renewable energy, so the goal is to sail around the world without emitting CO2 (carbon dioxide), particulates or noise. This is also important because maritime traffic emits many sounds that can disturb marine life,” Amélie Conty, who travels aboard this catamaran documenting its unique voyage, told El Faro. As part of this global tour, the Energy Observer needed an unmissable stopover: crossing the Panama Canal.

So it was that the vessel arrived in Panamanian Caribbean waters in mid-February of this year, and a few days later, completed its inaugural transit through the interoceanic waterway on its way to the Galapagos Islands.

Its passage through Panama Canal waters was unique in many ways, starting with the catamaran’s peculiar design and small size, which contrasted inside the Panamax locks chamber against a giant vehicle-carrying vessel. 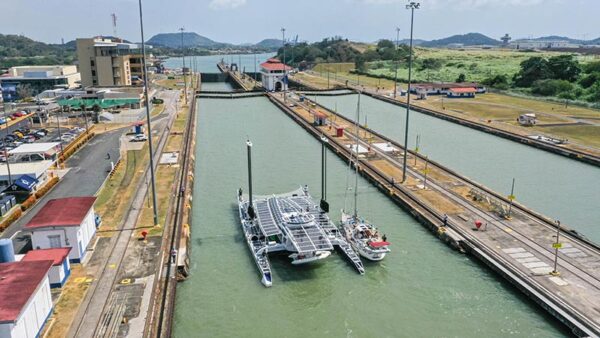 “The vessel runs on solar energy, wind and also hydrogen, so we are 100% autonomous, even during the night or when there is bad weather,” detailed Amélie as she guided the El Faro team to learn the details of the Energy Observer’s operation and mission.

What this ship started four years ago has today become a possible reference for the future of the maritime industry, especially in the face of commitments and the goal of decarbonization.

“When we started four years ago, the industry kind of laughed at us a little bit, but 2 years ago, they started to get interested in what we were doing. In fact, we now have CMA-CGM which is a large shipping company as one of our sponsors. So we hope to have an impact on changing the way the maritime industry sees our future,” Conty said.

The goal of all actors in the maritime world is to reduce total annual greenhouse gas emissions by at least 50% over the next 30 years, and the different initiatives promoted by the Panama Canal in alliance with its customers, as well as in the sustainability of its operations, are moving in that direction.

During its tour, the Panama Canal gave Energy Observer recognition for its efforts in the transition to the use of renewable energy, a vision that is shared by the interoceanic waterway.

In their quest to reduce their carbon footprint, countries have committed to adopting urgent measures to combat climate change and its effects, as part of the United Nations Sustainable Development Goals.

One of the activities that has joined this commitment is the maritime industry, of which the Panama Canal is an integral part. 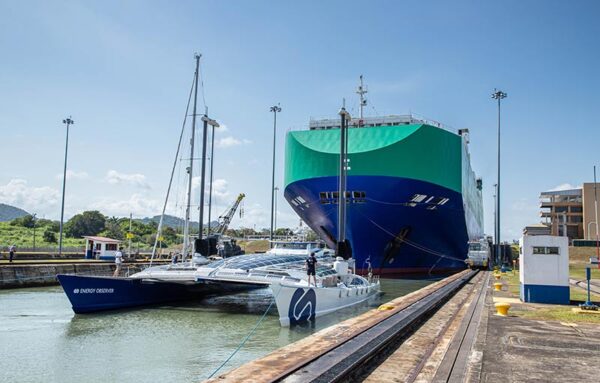 One of the most recent initiatives is the CO2 Emissions Reduction Dashboard. As the shortest maritime route, the Panama Canal represents the most environmentally friendly option, which is why it is known as the Green Route.

In 2020 alone, the Panama Canal contributed to the reduction of more than 13 million tons of CO2 emissions, compared to alternative routes such as the Suez Canal, Cape Horn, or the Cape of Good Hope. To get an idea of what this means, 13 million tons of CO2 are equivalent to the greenhouse gas emissions of 2.8 million sedan vehicles driven during one year.