In compliance with a strict annual maintenance program, the Panama Canal carried out dry chamber works in the West Lane of the Gatun Locks, in the province of Colon, which brought together more than 200 workers from different divisions for nine days.

The major maintenance or overhaul work began on August 30 and ended on September 7. The project included the rehabilitation of Gates 27 and 28; the replacement of the metal seals of both structures and the walls, four rising stem valves and the concrete flaps, and the repair of Gate 40.

“The other gate we are working on is Gate 40, which in a closure we did last October that was to repair the 39-40 swing, we found that gate had severe damage to the base or plate, so we included it in the scope of this project,” Wilfredo Yau, locks division reconditioning engineer in charge of the project, told El Faro.

He added that, in addition to the major works, minor works were carried out on the lateral culverts, among others.

Canal maintenance works are carried out with a combination of methods, including tasks executed with internal Canal resources, as well as through external contracting, and with strict planning. This management depends on multiple factors and considering the particularities of the different types of assets and their criticality. 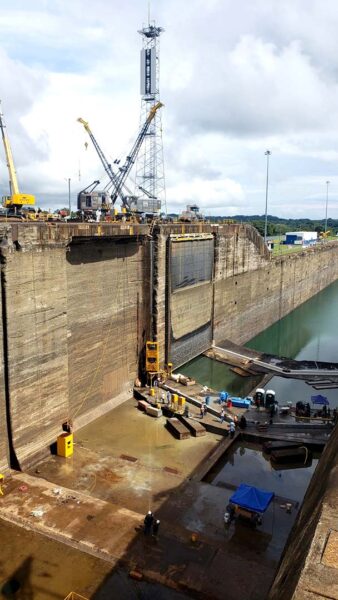 The annual plan also considers the frequency stipulated for each type of equipment and for elements such as structural components, so routine inspections and analysis of the condition of the infrastructure are carried out to define the needs.

Yau explained that 28 years elapsed since the previous complete overhaul work of Gatun Gates 27 and 28, while the other minor tasks in that same lane, were carried out in 2017.

In the last three fiscal years, the Panama Canal has allocated the sum of B/.1,263 million to maintenance programs to ensure the continuity and efficiency of its operations.

Each year, the budget for maintenance programs is higher than the previous one, since it is a key area for the Canal, and has allowed that after 108 years, the interoceanic waterway provides its customers with an uninterrupted, efficient, and safe service. Maintenance includes infrastructures such as the centennial locks (Panamax), and floating equipment, such as the tugboats that support the daily operation of the Canal.

The budget for fiscal year 2023 contemplates about B/.103.3 million for the maintenance of the Panamax and Neopanamax locks. 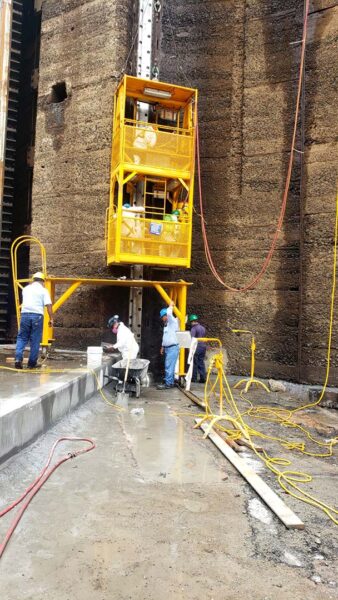 In addition to these projects, the Vice-Presidency of Infrastructure and Engineering establishes a budget for the maintenance of the floating and land equipment, as well as the navigation channel, for an approximate amount of B/.232 million.

Similarly, in the Panamax Locks, the maintenance plan includes regularly scheduled works at the Gatun, Madden and Miraflores spillways, for which there is a multi-year work program.

Among the projects to be executed during this period, which is about to begin, are the following: