Discovering the family we are - El Faro | Canal de Panamá

Hurdle traveled to Panama with the unique desire to know something about the grandfather he never knew. Through the library’s sources of information on Canal construction workers, the grandson found answers to his questions.

Elkana Hurdle came to Panama from Barbados in 1908 to work on the construction of the Canal. He was one of the thousands of Afro-Antillean workers who left everything in their islands to come to try their luck in the isthmus. 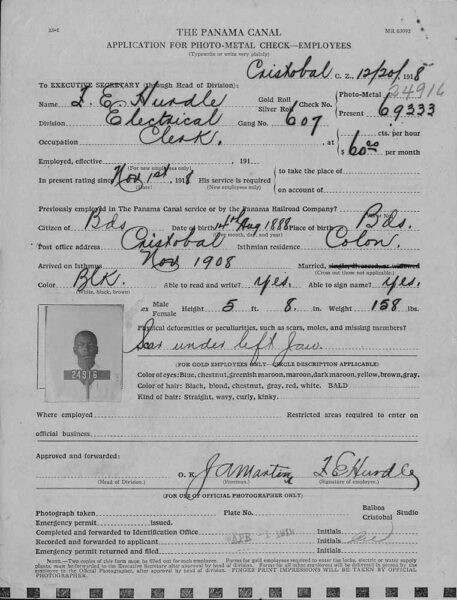 Most of the workers from the Antilles did work that, in comparison with the workers from the United States, was low paid. But Elkana was a peculiar worker. He could read and write, and by 1918, he was working in the electrical division, earning $60 a month, a considerable amount for the time.

Unlike many of his peers, he did not stay in Panama. After working for 10 years in the Canal, destiny took him to Bermuda, where he settled and raised his family.

Elkana never forgot Barbados and Panama; they were recurring themes in family conversations.  Freston is well aware of the Canal’s impact on Barbados: “At that time there were about 150,000 people living in Barbados, and of those, 20,000 people came to work on the construction.”

The day he came across the information, Freston, distraught, called his wife. “He looks like my brother,” she said, looking at the photo of her grandfather.

Javier Wallace is an old acquaintance of the library. A few years ago, this U.S.-born son of a Panamanian was researching former athletic scholarship programs for students of Afro-Antillean descent living in the Canal Zone. Now, recently graduated from his doctoral program and a professor at Duke University in North Carolina, he is resuming his research to complete his background.

He has had a hard time finding the exact names of his great-grandparents: “It’s difficult, many times he gave them the names of two of them who, in theory, worked in the Canal. With one of them we were lucky and got information: Hubert Wallace”.

“He can’t be my great-grandfather,” said Wallace, “he was born much earlier.” But, when checking the date he started working at the Canal, it appeared as July 1908. The document had a typographical error; the date of birth was incorrect. Thanks to this, Wallace was able to verify the real date and place of birth of his grandfather: July 31, 1879, Jamaica. 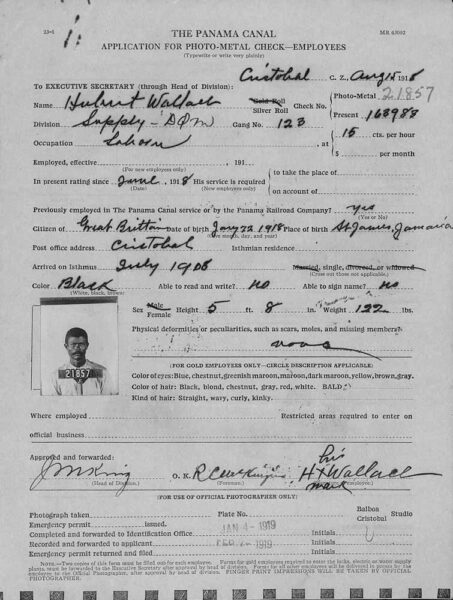 Shannon Musgrove is a young woman from the United States on her first visit to Panama. Always smiling, she informs us that she has been searching for days for information about her grandmother, Alzamay Wallace-Brown, born in 1925 in Jamaica.

“At some point in her childhood, she came to Panama,” she notes, “but we think she came alone, since she never talked about her family.” Among the documents Shannon has been able to find in other institutions is a departure permit from the port of Balboa to travel to the United States, dated October 1946. Alzamay was only 21 years old and it appears that the trip was sponsored by a U.S. Navy commander. Once in the United States, she would meet what would become Shannon’s grandfather and they form a family.

“She spoke very little about Panama. She only mentioned that she lived in a dangerous place and that she worked taking care of some children.”

Unfortunately, no information about her grandmother could be obtained, as most of the archives deal exclusively with Canal construction workers. In the absence of tangible documents about the grandmother, we were left with one last resort: to ponder and reflect on the life of a young Jamaican immigrant girl in Panama in the 1940’s. “Most likely,” Shannon concluded, “she worked with the family of that commander in Panama, perhaps as a nanny, and they decided to take her with them to the United States.” But why is the grandmother’s story so important, we asked. “I lived with my grandmother when I was a teenager and I want my daughter to know about her,” Shannon notes excitedly.

The importance of family

The three examples mentioned above are just a small sample of people in search of their roots. That primal interest in understanding our past is necessary to face the future. Freston Hurdle is enjoying his retirement in Bermuda; Javier Wallace has just given a TED talk on human trafficking in sports and is about to publish a book on the same subject; and Shannon Musgrove is the mother of a beautiful baby girl, teaches yoga and is the director of student support services at Susquehanna University, Pennsylvania. They don’t know each other, but they are united by a common past. They are descendants of people who received the call to a promised land, a land that would be divided and then further unite the world.

Spaniards, Italians, Chinese, Hindus, Greeks, Jamaicans, Barbadians, among many others, came to Panama to contribute to the construction of the Canal. Many of us Panamanians are their descendants. These immigrants enriched the multiculturalism of this nation. They helped create this beautiful unity in diversity that pushes us to be open, and always open to adventure: in short, they helped create the Panama of today.