Dialogues for the watershed: reflections of a protagonist

Fate placed Stanley Heckadon-Moreno at decisive moments in the recent history of our country and, curiously, also of the Panama Canal.

This author, researcher and anthropologist from Chiriqui, through his multiple responsibilities and projects, led the first detailed studies of the Panama Canal Watershed. He was part of the scientific community that raised the importance of protecting the forests on the banks of the Canal, in the “Coronado Dialogues“, where the foundations were laid for the creation of the Constitutional Title that created the Panama Canal Authority.

Throughout his four decades of research, he had the opportunity to closely study the watershed. Between 1980 and 1981, he was in charge of the Directorate of Renewable Natural Resources (later INRENARE), where he studied the farmers of Gatun and Alajuela Lakes.

Between 1985 and 1986, in the former Ministry of Planning, he coordinated the Working Group on the Canal Watershed. In the early nineties, he prepared the projects of the Tropical Forestry Action Plan in order to obtain funds for the protected areas of this region.

In addition, he worked on the drafting of the executive decree that created the Chagres National Park, which protects the headwaters that feed the Alajuela and Gatun lakes. 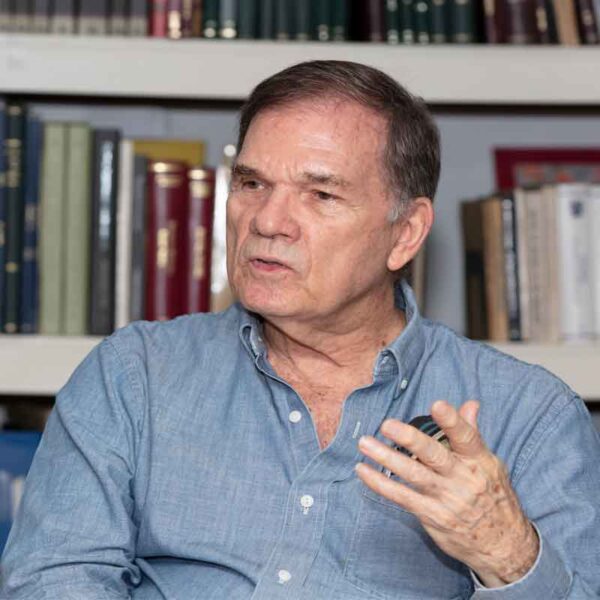 Since 2000, Heckadon-Moreno has worked at the Smithsonian Tropical Research Institute and is in charge of the Marine Laboratory at Punta Galeta, in Colón, where, as he explains between anecdotes and laughter, “he never imagined he would be”.

From your perspective, what do you think has been the impact of the Canal on our society?

They were activities that shaped the society, and the Canal is deeply linked to the economic, labor, and diplomatic history, and has been the way that has allowed this country to connect in a unique way.

Panama’s name is inextricably linked to the Canal and, of course, the interest that is out there in how it works, how it was built and how it is managed.

You played a role in the development of studies in the Basin before the transition of the Canal, and you worked closely with its communities, how was that experience?

Like many things in life, they are coincidences. I did my doctoral thesis in England (University of Essex), on the peasant colonization of forests, and the case of Tonosí came to my attention. I was working in the Ministry of Planning.

We were in a program called Integrated Rural Development, and I was sent to Tonosí.

I had to see the relationship between deforestation, soil erosion, sedimentation of rivers, burning of pastures, soil impoverishment and how, what was a colonization zone – full of these splendid forests with an extraordinary diversity of nature – was turned into what seemed to be a war zone.

Tonosí was the last frontier of colonization in Azuero and I saw that the peasants were leaving, poverty was driving them out and I asked them where they came from:

And that phrase “the scrublands ran out” led me to write a book called “Cuando se acaban los montes” (When the mountains run out), which I published with the University Publishing House in 1983. That is how I was linked to it.

And when I came back to Panama from England, I was one of those who in 1980 made the first environmental profile of Panama with an interdisciplinary team, which was very important for me.

Where did you begin your research in the basin?

On one occasion, I met the director of the then RENARE, which was one of the 40 directorates of the Ministry of Agriculture (MIDA), and the engineer Irving Díaz said to me: “Stanley, I want you to go to RENARE and give the staff an overview because we are starting a loan for the Panama Canal Watershed with AID (now USAID)”.

I had never worked with the concept of watersheds and, for the first time, I had to get involved in the Chagres, Boquerón, and Pequení river basins in 1980.

So I was with the RENARE guys. I started first at Lake Alajuela, Boquerón River, Pequení River… I learned a lot. Then, Gatun Lake and the communities to understand the history of migration to the Canal watershed.

I did an extensive report for RENARE, I interviewed a lot of people. I did a history from the time of Colombian Panama before the Canal, because I interviewed old people who remembered the banana era in the Chagres River, and then, when the Gatun dam was built.

These were people who remembered the towns of Chagres, Gatun, Dos Hermanas, Horca Lagarto, and Frijoles, when they were river towns. So I learned a lot about the peasant society, about the Chagres River before, during and after the Canal and how cattle ranching became a policy.

Then, I jumped from that experience to work with the concept of watersheds. The Ministry of Planning was like my second university because we were ecologists, engineers, statisticians… it was a very creative group.

Later, he was again involved in the Canal Watershed, but in another project.

Between 1985 and 1986, from the former Ministry of Planning, I coordinated the Working Group on the Canal Watershed.

It turned out that there was a water crisis, a drought. It was one of the first times I heard about the El Niño current. We got a call from the Presidency about the drought, and that it would probably spread and that the draft of the ships would have to be lowered. We had to see what was going on.

That is how we formed the Canal Basin working group and it was my turn to coordinate it.

We were there for two years. We were able to bring people from other countries who had managed watersheds. Very important decisions were made there.

At the closing of the working group, after two years, President Eric Arturo Del Valle told me: “Dr. Heckadon, before coming to close this event, I signed the executive decree that you prepared for me to create the Chagres National Park”.

For all of us who were there, it was like a relief, it was as if we had bought life insurance for the country.

I believe that for him it was just another decree, but not for the country. For the country, it was to protect the headwaters of the Chagres, Boquerón and Pequení Rivers, which is where the bulk of the water for the Canal and the water treatment plants comes from.

Did we make the right decisions?

Personally, I am proud that I have had the opportunity to travel before and after [the reversion] and see the way Panama made the decisions and formed the Panama Canal Authority, which has that autonomy.

This was a decision made in the “Coronado dialogues”, where, as fate would have it, I had to participate as part of the scientific community and fight for the forests. That was an extremely important event to form a consensus.

But there were extremely violent discussions there. I had to defend the issue of the forests, that all the forests along the Canal should be protected, including those at the Albrook and Clayton bases.

The least problematic thing was to reach consensus on the Canal forests and the bases, because there were other issues that… God save me. I had to do the easy part, which was to convince people to protect the forests.

Did that work cement the work you are doing now with the communities in the watershed?

Of course it did. I believe that the “Coronado dialogues” helped a lot to clear the air and to make decisions, and today I am really proud of that.

It was not an easy road. It was like being in a mountain where there are several shortcuts and we were looking for different voices and opinions, and we found our way until we managed to get out.

Also, when the time came for the expansion and I sat down in Agua Clara to see that ship pass through the Third Set of Locks, it was like: “Look where we are! I felt very proud because in all the previous studies, we had let it be known that we have to think about how much water and what quality of water we are going to have.