On Diablo’s fixed tugboat dock at the Canal’s Pacific entrance, land crane 86100 lifts the 27.1-meter-long, 27.1-meter-wide, 1.8-meter-high, 46-ton floating structure out of the water as workers pull on thick ropes to help position it in just the right place. Friday, April 9 was the first day of the works, during which the structure was disconnected, and the pier was removed from the water to be placed on temporary supports where it will be maintained.

This is the west floating dock, which requires major maintenance, as five years have passed since the previous corrective work. 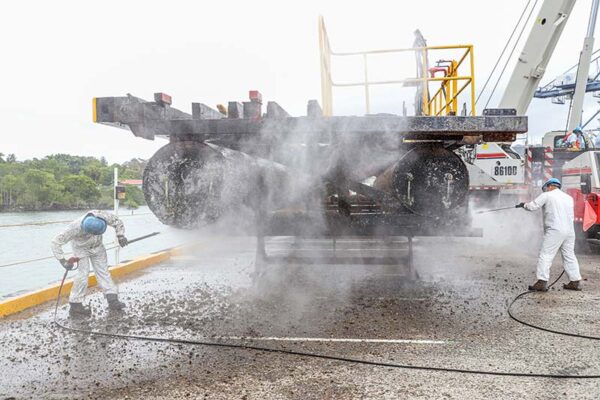 About twenty workers from different crafts of the Canal’s Civil Works and Facilities Maintenance Division are participating in the works, supported by collaborators from other sections, such as crane operators, riggers and engineers.

As soon as the pier is secured on the piles, like little ants, the craftsmen begin the next phase: the cleaning of the marine fauna adhered to the submersible surface over the years. In total, the work plan contemplates five phases or rehabilitation tasks.

“The works basically consist of cleaning the pontoons, preparing the surface and giving it the industrial coating by means of an epoxy anticorrosive primer with a high solids finish, as well as welding, reinforcing the steel structures and placing the sacrificial anodes to prevent corrosion,” says Avelino Cevallos, the supervisor in charge of the works.

Cevallos, a civil engineer, explains that corrective maintenance of the submersible structure of the pier is carried out every five years; but in that interval, minor work is carried out on the non-submersible parts, such as changing the wooden deck structure, the fenders and the counterweight beams that keep the pier level.

The works were completed in a period of seven days, and is part of a dock maintenance plan, both for the tugboats and for the floating craft that transport the deck attendants (cable passers) and the pilots in each transit operation through the interoceanic waterway, explains Cevallos. 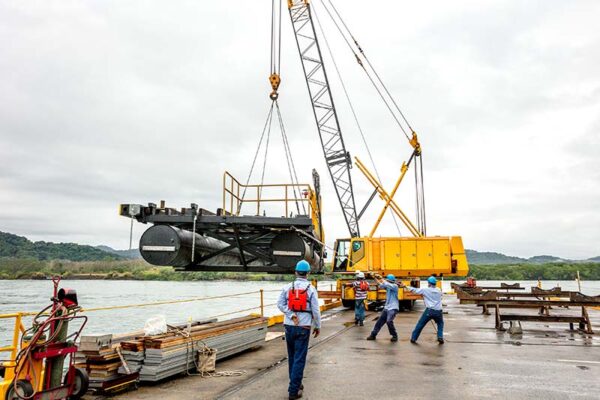 In the middle of the interview, our young interlocutor pauses…and then resumes with more energy to proudly affirm: “In the Panama Canal we have a very strong maintenance culture, which has allowed us to maintain uninterrupted and safe operations for more than one hundred years”. It is true that this maintenance culture has made it possible for the century-old locks to operate today with the same or greater efficiency than when they made possible the inaugural transit of the steamship Ancon on August 15, 1914.

“Here at the Canal we take great care of our structures and equipment. We are proud to contribute to ensure that operations are maintained continuously and safely,” said Cevallos.

Between the second and fourth day of this work plan, the craftsmen prepared the surface of the pontoons with ecological blasting and painting. 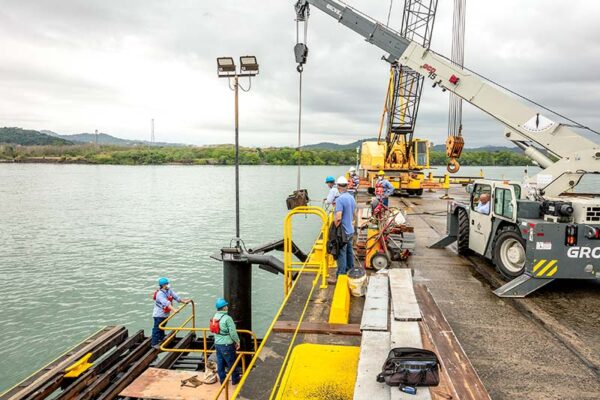 This stage is crucial to ensure that the structure to be returned to the water is safe, since residual scale on steel surfaces is not a suitable base for applying modern high-performance protective coatings.  It is therefore removed by abrasive blasting with water and sand.

By Thursday, April 15th, the reinforcement weld was applied, while on the seventh day, the wooden deck was installed. This task marked the end of the major maintenance of the Diablo pier.

The following Saturday, at first light and taking advantage of the high tide, the 75-ton capacity land crane 179 returned the heavy floating structure to the water. It will be ready to serve the tug and floating craft crews for the next five years, which may mark its end, after some 60 years of service, to make way for a new structure.