On a typical day, the breeze from the north envelops the Central Mountain Range and ripples the white grasslands of the Culebra Cut, suddenly reminiscent of a snowy landscape under the warm sun. During the flowering period, millions of white spikes line, like carpets, hills and slopes along the interoceanic strip. These are the flowers of a grass popularly known as “canal straw”.

The scientific name of this grass is Saccharum spontaneum, and it is considered an invasive weed because it is an exotic species introduced to the country in the 1930s. Today we see it all over the Canal watershed, and some consider it a serious threat, as it aggressively colonizes natural ecosystems. Its dense biomass does not allow the development of native plants. 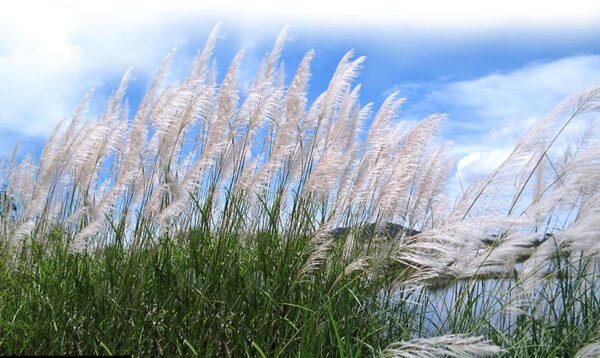 It has a very small seed that is able to fly with the air currents and move to remote places. Thus it has managed to establish itself with ease in other regions outside the Canal area. It is not a demanding herb, it grows profusely in poor and degraded soils. Wherever the insignificant seed arrives, it germinates and grows vigorously, multiplying to form an impenetrable tangle of thin but strong cylindrical stems and long, sharp-edged leaves. It is accompanied by a network of subway rhizomes with anchoring roots that provide stability to soils; therefore, it is important in the restoration of eroded soils and stabilization of sloping soils.

It is not clear from the available historical data whether this was one of the reasons why it arrived in the Americas (as a tool to stabilize slopes and reduce erosion in the Canal), but it is a fact that this weed has the ability to help combat erosion efficiently. At the same time, a theory based on documents from the last century suggests that canal straw may have been used by the U.S. Department of Agriculture in a bank of plant material established in the Experimental Gardens of the Canal Zone. The most obvious purpose would be the genetic improvement of its cousin Saccharum officinarum sugarcane, to enhance its resistance against the Mosaic virus, an agricultural pest that intensely attacked sugarcane crops in Panama.

Overlooking its route of entry, the reason for its arrival, its controversial pros and its indisputable cons, the Canal straw has become, since its uncontrollable and undesirable expansion throughout the isthmus, a naturalized weed of the Panamanian flora.

Scientific name: Saccharum spontaneum
Data: Fast growing weed..
Its control is extremely complicated. It belongs to the grass family and is native to Asia and Africa. Its potential as a biofuel for electricity generation, fodder and cellulose is being evaluated. Large extensions of this weed represent a dangerous source of flammable material during the dry season. It burns easily, favoring spontaneous fires that devastate native fauna and flora, and burn the organic material layer of the soil.