The Roberto F. Chiari President’s Library receives all kinds of historical research requests, but one on Nov. 15, 2021, stood out above the rest. On that day, a cardboard container arrived with “United States Postal Office” stamped on the front. Inside was a handwritten letter from Dr. Paul Michell requesting information about Brigadier General James Postell Jervey, a former Canal worker from the town of Powhatan, Virginia, USA.

Mitchell, a relative of Jervey’s, was gathering information to validate a request to the Virginia state senate. The idea was for the senate to make a resolution celebrating the life of Mr. Jervey and two other illustrious citizens of Powhatan.

The library and archives section set to work and found information in books, annual reports, photographs, and Canal magazines.

In September 1913, the Gatun Locks were completed and a certain day was set for the passage of the first ship, a small tugboat with a limited passenger capacity. Something went wrong with the electrical machinery and Goethals was informed that it would not be possible to get the ship underway until the following day. His response was characteristic: “Today the ship passes.” And it did. Shortly before sunset, with an insanely enthusiastic crowd lining the walls of the locks and a few equally happy people on the decks of the tiny vessel, it passed through all three locks and, the last gate opened revealing the setting sun, steaming on the calm waters of Gatun Lake 85 feet above sea level. A truly memorable and historic occasion, but Goethals, with his usual modesty and fear of publicity and personal ostentation, refused to take the place of honor assigned to him on the ship and gave it to a four-year-old boy.” James Postell Jervey

James Postell Jervey was born on November 14, 1869 in Powhatan, Virginia. He graduated from West Point, with a commission as a second lieutenant in the Corps of Engineers on June 11, 1892, and attained the rank of Major on February 28, 1903. His military career included service in the Philippines when he served from February to September, 1906, as an engineer in the province of Moro. In addition to his other army duties, he served as an instructor in engineering at West Point and at the Engineer School in Washington, D.C.

Jervey arrived in Panama on July 24, 1908 with his wife and children. His first position was as assistant engineer in the Atlantic Division until September 15 of that year. After the reorganization of that Division, he was appointed resident engineer and put in charge of the masonry construction of the Gatun Locks, where he worked until 1913. The Gatun Locks were operated for the first time on Friday, September 26, 1913, when a tugboat was piloted from the Atlantic to Gatun Lake. This date was chosen as a tribute to Jervey, due to his upcoming departure from the isthmus.

Jervey never forgot his happy years in Panama. He even wrote a short biography of his former boss, General George W. Goethals, in 1928, when he became Brigadier General.

In April of this year, we received a new letter from Dr. Mitchell, notifying us that the Virginia Senate had passed the resolution to celebrate the life of James Postell Jervey, and thanking us for the help received. The library responded by congratulating Jervey’s family on the achievement as a happy ending point to the investigation. 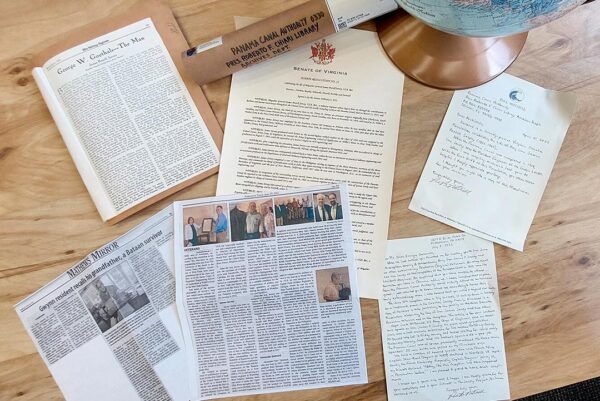 However, the correspondence continued. In August, we received another letter notifying us of a reception, held on June 18 at Powhatan, where the memory of Postell Jervey was celebrated and which will go down in history as a historic event in that family. Captain Jack McDonald, a member of the U.S. Army Corps of Engineers, and Jervey’s great-great-grandson, delivered a speech in which the Panama Canal was prominently mentioned.

In this last, always handwritten letter, Dr. Mitchell bids farewell saying “I am deeply grateful for your help and for your interest in the Jervey project. You have honored us all.” The letter had an oversized enclosure: the copy of the Virginia Senate resolution.