The youth of the Panama Canal Watershed are demanding progress. The young people who live there are clear that only with education will come better days for their towns; however, attaining higher education is, for the moment, the privilege of few.

This was expressed in the Integrated Educational Offering in High School, Technical and Professional Education, a document that was presented to the Panama Canal this March. This is a first step to then take it to the country’s authorities and request investments for the region in order to create the conditions to achieve these goals.

Itzel Muñoz, member of the Youth Network for the Environment and the Panama Canal Watershed, explained that the initiative arose as a result of the discussion they held with the Canal Administrator, Dr. Ricaurte Vásquez, in April 2021.

She recalled that this exchange gave rise to the idea of presenting this proposal, which will then be submitted to the Executive in search of solutions. In the document were considered the problems and alternatives to meet the needs of students who currently attend schools, those who wish to start a university career, or those who would opt for training in technical trades as an alternative to aspire to a job. 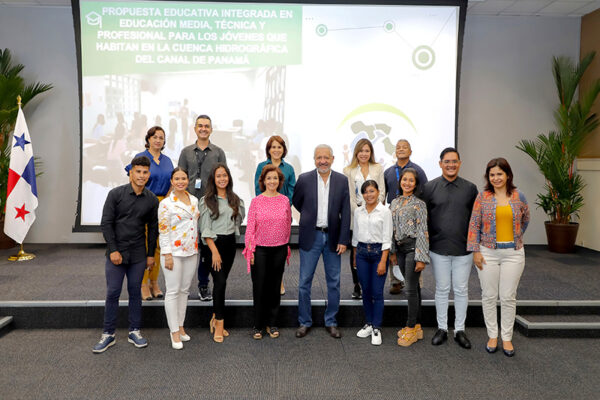 The development of an idea

From that conversation in 2021, the young people in the network left with an idea, which later became an objective. The specialists of the Panama Canal’s socio-environmental team guided them, and they were able to complete a document with the participation of representatives from all areas.

It was a process that took place in the midst of a complex year; restrictions due to the COVID-19 pandemic posed an additional challenge, but did not slow down the impetus of the members of the Network.

José Alveo, one of those young people, recalls that in order to hold the meetings, they made use of virtuality: some connected from their homes, others traveled to points where they had signal, or met at the home of someone who had internet service. The six areas of the watershed were represented, as each of them has its own particular conditions.

According to Alveo, very important steps have been taken that will have an impact on the future of the communities of the Canal Watershed, since it is an effort that will create the conditions to prevent students from dropping out of the system, and to achieve their goals of becoming future professionals and positively influencing their region.

The document includes the main limitations faced by students in this part of the country, as well as alternative solutions related to the construction of higher education centers, the use of existing infrastructure, transportation, scholarships, internet access, and places to stay, among others.

For Magnolia Calderón, vice-president in charge of Water Resource Management of the Panama Canal, this is a proposal that cannot be dealt with exclusively by the Canal, as it requires the participation and commitment of other government entities, as well as the identification of other stakeholders, such as the private sector and civil society.

There are 184,000 people living in the watershed communities and more than 50,000 students, distributed in 153 educational centers, of which only six are high schools, while there are no extensions of higher education centers.