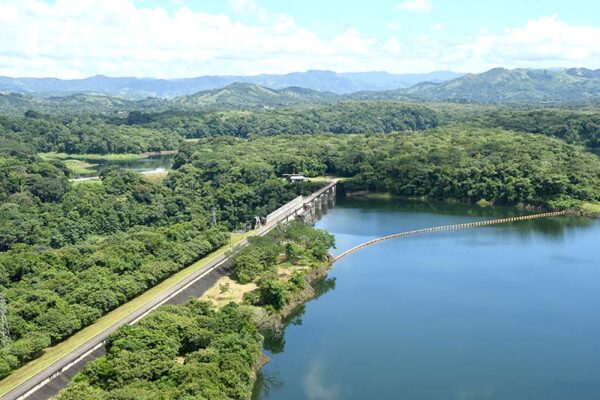 In the Canal, water is stored in the Gatun and Alhajuela Lakes, which are fed mainly by the Chagres River, as well as other rivers within the Canal watershed.

But just as important, multiple factors are measured in the Canal, such as lake and river levels, rainfall and climate variations, among others, to generate valuable models and forecasts for the management of this resource. These measurements make it possible to anticipate the rainy season in the watershed, and it was this that made it possible to take preventive measures in the face of droughts in past years. With this data, it is now possible to contemplate what the next rainy season will be like.

According to Erick Cordoba, Panama Canal Water Resources Manager, last year the reservoirs were filled due to the La Niña phenomenon.

“When both reservoirs are filled, we can sustain operations until the end of the dry season without any problem. With the La Niña phenomenon, it is expected that for the Northern Hemisphere spring it could become a neutral event,” Erick Cordoba noted.

“Neutral means average precipitation for Panama, which is good for our region and for the Canal watershed,” Cordoba added.

Towards the month of May, what meteorologists call “the spring barrier” (when the rainy season begins) should be overcome; and then, according to Cordoba, “the forecast of how the year will close for the months of October, November and December can improve. Once we reach those dates, we will have more certainty; but for now it looks like a neutral year”.

The work that did not stop

This staff goes out to the field to analyze the data provided by the 60 hydrometeorological stations located along the Canal watershed that covers territories in the provinces of Panama, West Panama and Colon.

Their work does not stop. And in the face of the pandemic, this team was forced to take extreme security measures. Oscar Baloyes, Panama Canal hydrologist, explains that these stations are communicated with his team by telemetry.

“There are certain programs and processes that you have to comply with, and for that, you have to go every month to get the data, analyze it, send it to the hydrologist so that he can make a real analysis, a water balance of the watershed”.

The field personnel and hydrologists must monitor, watch the rivers, the stations, and for this, they must go to the field “by canoe, by car, on foot, sometimes by helicopter as well. We must be zealous because the watershed is the genesis of the Panama Canal”, he adds; and he stresses that “if there is no watershed, there is no Canal, and there is no water for the population”.

On the other hand, according to Baloyes, there are the professional hydrologists who make the calculations and projections of the behavior of the lakes. “That part is very important because you have to know how much water is available to see the projection of how the management of the Panama Canal is going to be.” 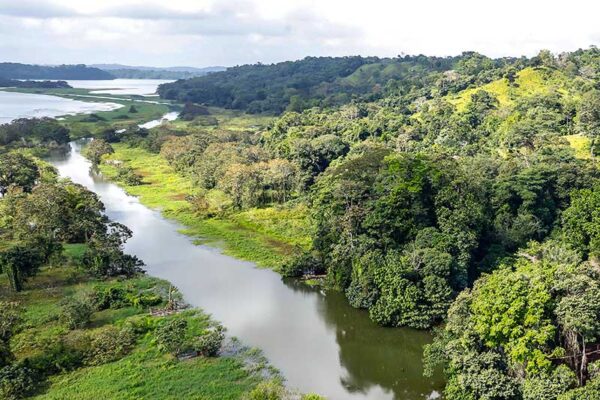 “We have a value called reliability, and that is why we have to do things right with the methods and procedures we have at our disposal,” he said.

His work team, naturally, has had to manage with extreme care during the pandemic; however, Baloyes explains, “the adjustments have been almost imperceptible, because we continue to do the job, to meet our goals and obligations.”

“Panama Canal occupational safety specialists,” adds Baloyes, “gave guidelines such as, for example, to set up special trash bins for depositing masks, determined the number of people who could be in a physical space while keeping their distance, the mandatory use of masks, and above all, the mentality of taking care of each other to continue doing the job.

The water that about half of the country’s population consumes and allows the Canal to function is stored in two main lakes: Gatun and Alhajuela (both artificial), which were created when the mighty Chagres River was dammed.

These lakes are fed by rivers within the Panama Canal Watershed, which covers territories in the provinces of Panama, West Panama and Colon.

Hydroelectric power plants were built in the Panama Canal’s lake dams to improve water use in Gatun and Madden.

With a committed workforce, the Panama Canal ensures the availability of water for human consumption and the operations of the interoceanic waterway, respecting sustainable development and socio-environmental management. The Canal also manages a thermoelectric plant at the Miraflores Lake dam.

Additionally, it has water treatment plants at Monte Esperanza in Colón, Miraflores in the Pacific, and Mendoza in La Chorrera.

But there are other water treatment plants that take water from the Gatun and Alhajuela reservoirs. These are the Gatun River (Transistmica), Antonio Yepes De León (Sabanitas), Federico Guardia Conte (Chilibre), and Laguna Alta (Arraiján).

In addition, Ingeniero José G. Rodríguez (Arraiján) and José “Pepe” Fierro (Gamboa) water treatment plants, both under construction, will also be supplied in the future.

To respond to the challenges in the availability of fresh water caused by the increase in population and productive activities, the Canal published the bid for the prequalification for the design, construction and implementation of an optimized water resource management system.

Thus begins the process to modernize the current system and guarantee water supply for the next 50 years. In this way, the Panama Canal fulfills its constitutional responsibility for the benefit of our country.