The founding of American cities is a universal event, and Panama stands out as the first city on the American Pacific. We will talk about the 19th century city, water and the Canal, whose analysis complements, among other social dimensions, the one related to the bicentennial of the bicentennial of our independence.  The urban context will be the axis of approach to reflect in that direction.

A look linked to water will be the guiding thread that will explain the city in a time period of more than 300 years, and a persistent element in the determination of the technical solution for the interoceanic communication.

The city, in the first four lustrums of the 19th century, did not present major changes in two centuries of colonial history. Panama (the new one) debuts its new location, and inherits some of its problems, such as the permanent water supply for its neighbors.  The city burned on many occasions during the first two hundred years.  There are records of three fires in the eighteenth century and seven in the nineteenth century. 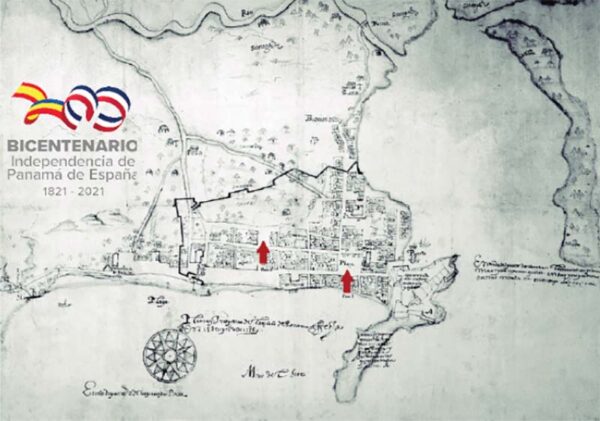 Scholars have had difficulty describing it, since census information is deficient and limits urban analysis. The documentary archives are not accurate due to the social heterogeneity, the variability of the population in the different temporalities, among other reasons.

In 1749, half of the land was unoccupied, giving the impression of being empty, with the exception of the religious buildings, the bourgeois houses and the canyons, which together represented 32% of what was built.  By the year 1737, the intramural area had 378 houses out of a total of 910. The suburb had 532 houses, that is, 59% of the total. The new city was located within the walled enclosure, a defensive complex that protected it from the attack of pirates and the threat of the maroons.

Other authors describe that outside the walls, it extended towards the Santanero suburb (which included Santa Ana and Calidonia), which was inhabited by blacks and mulattos, and whose population exceeded in great number. Panama City had an estimated population of 5,000 in 1851, reaching 10,000 by 1856. It reached its peak of 19,000 in the period of the French Canal. The majority of the population lived outside the walls, mostly non-white. This population that inhabited the suburbs was mainly engaged in commerce, confined to the Salsipuedes and Playa Prieta precincts.

What forces changed the city?

The development of a succession of transportation technologies transformed the city in the 19th and early 20th centuries. For the next 150 years, at the time of independence from Spain, the city maintained its character as a port and commercial city. By the second half of the 19th century, the industrial revolution burst in with the construction of the interoceanic railroad and the navigation of ships powered by steam engines. Both technological irruptions met the demand for travelers generated by the Gold Rush.

The most profound impact on the Atlantic side occurred with the founding of the city of Colon. Its port and railroad origin is probably unique in the region and a subject yet to be investigated in depth. On the Pacific side, the train demolished the colonial defensive structures. The earthen walls disappear and “the esplanade” is incorporated into the urban offer, under the administration of the North American company that owns the railroad, who then takes charge of its development. These were the times of the rise and fall of the French Canal. The accelerated urbanization of today’s Avenida Central begins, in the direction of today’s Plaza Cinco de Mayo, site of the new railroad station building.  The neighborhoods of El Marañón, Calidonia and San Miguel appear. The urban expansion grows along the axis of the “Camino de La Sabana”. The architectural image reflects the French influence, mainly due to the appearance of mansards as architectural elements and other industrial elements that enrich the architecture.

In the midst of these profound changes, Panama City continued to experience sanitation and water supply problems.  The city did not have enough water and was an unhealthy place. The water supply was permanently resolved in the 20th century with the construction of the North American Canal.

The colonial city (that of the new settlement) had suffered from a succession of fires; it burned three times in the 18th century: in 1737, 1756 and 1781. In the midst of the fires, there was a lack of water to suffocate them, as well as a shortage of water for drinking and other uses.

The city’s water consumption was supplied by springs, one of the best known of which was El Chorrillo and other fresh water wells, along with another source in the Hondo River, which flowed into the Grande River. El Chorrillo supplied the water demands of Panama City until the beginning of the 20th century.

The water was sold in the streets of the city. The activity in 1855 – described by travelers – was that of water carriers with water jugs assisted by carts, mules and horses. Prices were appraised at one real for the small barrels or jars. The scarcity of water in Panama City was well known. Many supplied the demand by means of wells dug in the houses and convents. Recent investigations have revealed the discovery of brocal wells and cisterns in the historic center, information that reveals this modality to solve the problem. Another way developed by locals was the harvesting of rainwater by means of cisterns built for these purposes.

The French design conceived a level canal, a proposal endorsed at the Canal Congress by the Paris Geographical Society. The French design evolved into a hydraulic one, damming the fresh water of the Chagres River, and making possible the management and administration of the resource by means of a system of locks.

The lack of water and the unhealthy conditions of the terminal cities, open the need for their sanitation. The interoceanic communication project announced the first water production and distribution infrastructures for Panama and the region. Water appears as a key element of urban character and that articulates the solutions of transport and interoceanic communication.

The modern city and the first aqueducts

During the 19th century, several initiatives were promoted, all of which failed, for the construction of an aqueduct for Panama City. The issue of an aqueduct for Panama, and later for Colon, would be conditioned to the transoceanic communication works, mainly due to the North American access to the Canal. The Hay-Bunau Varilla Treaty (1903), which established the Canal Zone and imposed ten-mile limits on each bank of the Canal, indicated under Article VII, that “all works of sanitation, collection and drainage of filth and distribution of water in the cities of Panama and Colon will be carried out at the expense of the United States”.

The cities would be supplied by an aqueduct, the construction of which was stipulated in the contract for the construction of the Canal. The precarious colonial city was brought to a state of modernity, with a home supply and sewage service, promoted by William Gorgas. The impact that the eradication of the yellow fever mosquito and the sanitation of the terminal cities and adjacent areas would have, was decisive for the conclusion of the Canal by the Americans.

The Brazos Brooks reservoir precedes the Agua Clara or Gatun plant, whose service coverage is complemented and replaced by the increased production capacity of the Monte Esperanza plant. The need to cover the consumption demands of the city of Colon, in addition to the new areas of Camp Bierd (now disappeared), and Silver City (Rainbow City, known as Arco Iris), as well as the settlement of Folks River, catalyzed the decision of George Goethals to build a plant of greater capacity, displacing the production of Agua Clara by the new Monte Esperanza plant.

The Monte Esperanza plant, along with its predecessor at Agua Clara or Gatun, were the first facilities of their kind in the region to use flocculation-sedimentation-filtration processes, becoming technological milestones. By 1911, the Agua Clara plant was operating under these processes, with the addition of a final aeration activity to aid in the removal of iron and volatile organic compounds, thus improving the odor and taste of the water.

The aqueduct, the solution

The first aqueduct began service on July 4, 1905 in Panama City. The design was the work of engineers John Wallace and Carlton Davis of the Isthmian Canal Company. The design is described as a reservoir 120 feet long by 70 feet wide and 20 feet deep, built on the highest part of Ancon Hill. The water intake is located on the Rio Grande River. The system would operate by gravity through a 16-inch pipeline, and the water would be piped to another auxiliary reservoir with a capacity of one million gallons. From there and through another pipeline, it would be distributed to the streets and houses of the city. Work on the aqueduct, according to sources in the Estrella de Panamá, began on July 22, 1904.

Modernity arrives to Panama and ends a long history of lack of water in Panama City, a circumstance that had not been able to be modified in almost three centuries of urban history.

Years later, in March 1915, the Miraflores water treatment plant began operations to supply the city.  Since then, it has supplied water to the homes of El Chorrillo, San Felipe, Santa Ana, Marañón and Calidonia.

The history of water production in Panama is relevant and should be viewed from a regional approach and not reduced to a local vision. The water treatment plants and aqueducts of Panama and Colon were pioneers in the field, not only in Panama, but in the entire region.

Bicentennial, water and the Canal

The importance of the ephemeris places the issue of water and the development of inter-oceanic communication in the foreground. It was in the context of the bicentennial of independence that Panama’s route for the construction of a canal was defined. Interoceanic communication identifies water as the element that articulates all technological proposals. Water management and the answer to supplying Panama City, ignored for centuries, were solved by the construction of the Canal.

Today, the issue of water supply for more than half of the country’s population is a responsibility of the Panama Canal, in addition to the challenges of managing the centennial Canal and the expanded Canal, establishing in the projection of the XXI century the momentum to ensure the availability of water for the uses that have been determined by the Panamanian society and its importance in national development.