John Langman, Vice President of Water Projects for the Panama Canal, discussed the current profile of the Panama Canal Watershed (PCWB), the water saving measures implemented and what is in store for the future in his presentation at the Panama Chamber of Shipping Annual Conference (CAM 2022).

The CHCP is located in one of the regions with the highest water precipitation in the world. Our country, consequently, is one of the largest water managers by taking advantage of its geographical position to provide a unique service to world trade through the Canal.

Particularly, this watershed, with its 3,338 square kilometers, has a favorable rainfall regime, since it receives approximately 2.5 meters of rain for each square meter in that surface, a large amount of water that accumulates in the Alhajuela and Gatun reservoirs.

However, there are important challenges to be faced due to the climatic variability that has imposed some of the driest seasons in our history. The main challenge has been to procure sufficient water both for the operation of the Canal and for the consumption of a large portion of the country’s population.

To address this situation, there is no single, simple alternative, but rather a complex series of possibilities, which are being evaluated to choose the most viable ones.

Langman warned that as time goes by, both vessel traffic activity has been increasing as well as the extraction of water from the lakes for human consumption. “Faced with this situation we have no choice but to take care of our water source. We have to take care of the watershed.”‘ 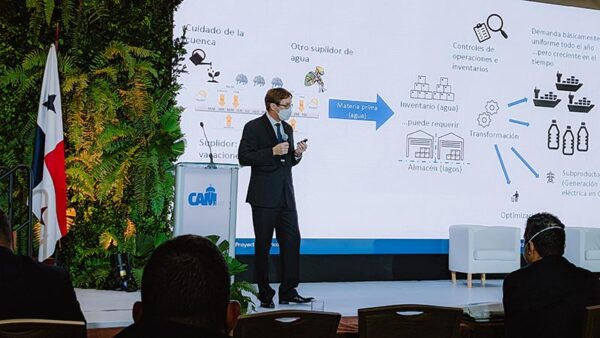 Panama in the face of climate variations

Panama is impacted by climatic variations and this has caused the rainfall pattern to change; not only is it raining less, but it is raining differently than usual.

According to the records of the watershed’s measuring stations, while the cities of Panama and Colon may experience heavy rains, the watershed experienced little or no rainfall during this same date.

Fortunately, both Gatun and Alhajuela Lakes filled to their maximum operating level at the end of the 2020 rainy season; this was achieved in a year when rainfall was 10% below the historical average.

Additionally, in December 2021, the Panama Canal announced that the Gatun and Alhajuela reservoirs had reached their maximum operating levels.

Despite the favorable environment, measures for the efficient use of water have not been neglected. Thus, management has been carried out to guarantee the water supply for more than 50% of the country’s population, and to allow ships to transit with the maximum draft offered by the 50-foot Neopanamax locks.

This monitoring has allowed the timely implementation of some measures to optimize this resource and guarantee its availability.

During the 2021 dry season, cross-filling and the elimination of hydraulic assistance in the Panamax locks were implemented as a water saving measure. In addition, power production at the Gatun hydroelectric plant was suspended.

A look to the future

Langman pointed out that although these water saving measures and their efficient use have been implemented, “as time goes by, we have to analyze what we will do based on this expected growth (in consumption)”.

Precisely to face the challenges of the future, the Panama Canal signed an agreement with the U.S. Army Corps of Engineers (USACE) for consulting and technical advisory services for the Water Projects Program, whose objective is to achieve an optimized water management system, focused on supplying this resource to the population and the waterway.

Last June, the Panama Canal reformulated the bidding model for the construction and start-up of the optimized water management system, in response to suggestions made by interested companies during the pre-qualification process.

The program consists of a portfolio of projects that will provide a solution to the raw water supply for more than half of the country’s population, as well as for the operation of the Canal.