The Canal in the books - El Faro | Canal de Panamá

The Canal in the books

Office 210 of the Ascanio Arosemena Training Center houses one of the treasures of the Panama Canal. Researchers from all over the world come to this place, amazed by a wealth of information detailing the construction and operation of one of the wonders of our time.

That treasure is the historical memory of the Canal that is found resting in its books, in thousands and thousands of pages that document the dramas, vicissitudes, and joys that have taken place in our beloved isthmus, and that is housed in that office of the President Roberto F. Chiari Library.

In the Library, the oldest original book is “Travels in the Republic of Colombia“ by Gaspard Theodore Mollien, dating from 1824, in which the author recounts his journey from his native France to Greater Colombia. The book describes the culture and idiosyncrasy of the peoples of the former great homeland and describes the lifestyle of the Panamanians of the time. On the other hand, the oldest writing where Panama is mentioned is found in a 1950 edition of the classic “Sumario de la natural historia de las Indias” by Gonzalo Fernandez de Oviedo, which was published for the first time in 1526.

The search for the best route 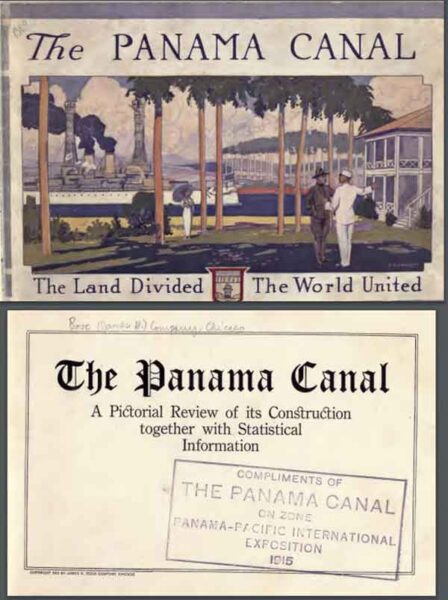 Providence chose Panama as the beneficiary of the interoceanic canal and during its construction, both the French and the Americans published books detailing the progress and feats that took place in the projects. These books are a faithful testimony of the unique experiences of each project. For example, while in “Apercu de quelques difficultes a vaincre dans la construction du canal de Panama (1887)” by Dr. Wolfred Nelson, from Montreal, Canada, and published exactly two years before the Compagnie Universelle du Canal Interocéanique declared bankruptcy, the author notes that “I myself believed for a moment in the possibility of the Canal. But this illusion flew away never to return, leaving behind a strong feeling of bitterness and disappointment”, while in “The Panama Canal – A pictoral review of its construction (1912)” published two years before the inauguration in 1914, he points out the pride that the American people should feel for being citizens of a country that fulfills the goals it sets for itself and for being an agent for the promotion of modernity and the development of the world. The book shows numerous images of machinery in operation, personnel in their daily work and infrastructure construction in its final stages, showing a project that can only be predicted to be a success.

The struggle for sovereignty

A new phase in the history of the Canal began from the moment it was inaugurated in 1914. The creation of a “zone” on both sides of the Canal, controlled by the U.S. government, was a source of friction and discord with the young Republic of Panama from the very beginning. This uneasiness grew over the years and is evidenced in books such as “Panama and the United States (1953)” by Ernesto Castillero Pimentel and “The Problem of Sovereignty in the Relations between Panama and the United States of America (1961)” by Thelma King. These books would serve as a preamble to the patriotic gesture of January 9, 1964, portrayed by the Argentine Gregorio Selser in his book, “The Rape of Panama” (1964).

In recent years, books have appeared that look at historical facts through different prisms. One of the most recent is the book “Lost Stories of the Panama Canal (2019)”, by historian Marixa Lasso, in which it is exposed that the disappearance of the towns near the Canal route was a product of forced evictions. Another recently published book is “El 9 de enero de 1964: lo que no me contaron (2021)” by Wendy Tribaldos, which narrates the events of that fateful day with unpublished textual and photographic material.

The aforementioned books are just a small sample of the thousands of titles kept by the President Roberto F. Chiari Library, which can be consulted at its headquarters in the Ascanio Arosemena Training Center (Balboa) from 7:00 a.m. to 3:30 p.m. Monday through Friday. The Library has put special interest in digitizing documents that can be accessed through Alexandria, its online catalog.