Panamanian scientist at the bicentenary of the Paris Geographical Society

The month of December marks another important bicentennial for Panama. It is the 200th anniversary of the Paris Geographical Society.

Two hundred years ago, the whole world was under a very intense wave of change. The ideas of the Enlightenment awakened political, social and scientific movements so powerful that they destroyed colonialism and inspired great technological changes.

“Both the Canal and Panama’s independence from Spain are daughters of the Enlightenment,” said Dr. Omar Jaén Suárez in an interview to EFE, after the formal ceremony of the Bicentennial of the Paris Geographical Society held at the Grand Amphitheater of the Sorbonne (France).

The relationship between this scientific institution and Panama is very close. In 1876, the Society organized a committee to promote international cooperation to carry out studies in Central America with a view to building an interoceanic canal. Ferdinand de Lesseps was on that committee.

Jaén Suarez, who was made an honorary member of the Society in 2001, participated in the members’ meeting in which the importance of the senses in discovering the world was emphasized.

“The world must be looked at, listened to, smelled, tasted and touched, so that each of us can flourish and joyfully understand the other and the other,” said Jean-Robert Pitte, president of the society and organizer of the event in his opening speech. 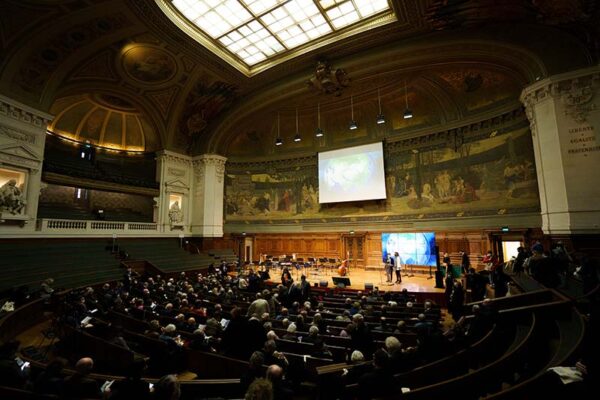 The bicentennial ceremony was held on the evening of Wednesday, December 15 at the Grand Amphitheater of the Sorbonne, under the patronage of French President Emmanuel Macron.

“The bicentennial celebration of the Paris Geography Society meant a lot to me, both as a Panamanian and as a geographer. It was a very moving ceremony because of the intelligence of its program, short and brilliant speeches, as well as the awarding of young students who are the generational relay. It was recalled how it was decided in 1879 to build the Panama Canal by the current route. That is the strong link we have besides the creation of this society in 1821, two weeks after Panama’s independence from Spain”, Jaén Suárez told El Faro.