By offering a shorter route for ships, the Panama Canal contributed to the reduction of more than 13 million tons of carbon dioxide equivalent (CO2) emissions by 2020, compared to alternate routes.

These savings are equivalent to the greenhouse gas (GHG) emissions of 2.8 million sedan vehicles driven for one year, or the carbon absorbed by 217 million tree seedlings grown for ten years.

To support outreach on how the maritime industry is reducing its carbon footprint, and in commemoration of the one-year anniversary of the entry into force of the IMO’s sulfur reduction emissions, the Panama Canal recently announced the launch of the CO2 Emissions Dashboard, through which it will publish monthly data on CO2 emissions saved by ships that chose to transit the interoceanic waterway compared to the most likely alternative route, such as the Suez Canal or the Cape of Good Hope.

The dashboard currently has total data for 2020, but will begin reporting monthly figures next month.

“The Panama Canal has long sought ways to provide greater value to its customers, beyond serving as a shortcut, with environmental benefits at the forefront of this effort.”

“Our goal is to help customers create more sustainable supply chains. By publishing this data each month, we seek to be more transparent about how the Panama route helps shippers reduce emissions with each transit, and to track our own growth as a green route for global maritime trade.”

The data is compiled by the Interoceanic Waterway Emissions Calculator, which allows customers to measure their reductions in greenhouse gas emissions by route, including the amount saved by transiting the Panama Canal, over others previously reported. 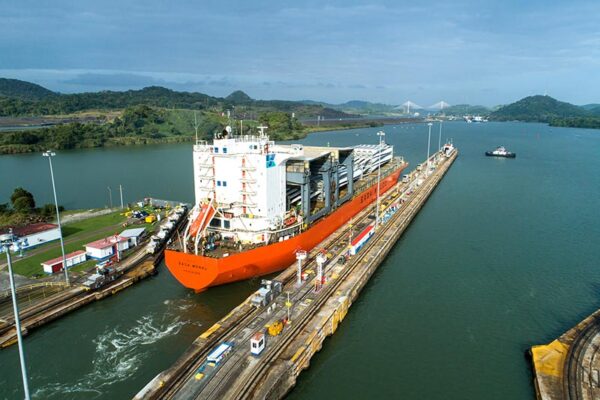 Now using geo-referenced data and technology already on board ships, the Emissions Calculator takes into consideration several factors, such as ship type, speed, route, size, capacity, as well as fuel type and consumption, in order to provide the most accurate measurements.

This announcement reaffirms the Panama Canal’s commitment to global efforts to reduce emissions, including the IMO’s initial GHG strategy, IMO 2020 regulations and the UN’s Sustainable Development Goal 13, which calls for urgent action to combat climate change and its impact.