The Panama Canal recently witnessed the transit of the Energy Observer, the first electric-powered ship to run on a combination of renewable energy and a hydrogen production system from seawater. One can only wonder, is this hydrogen-based, renewable-source marvel a feasible example for the world? In this paper we will explore the three “whys” and “hows” that explain the possibility of a future based on hydrogen and renewable energy sources. In addition, we will identify the role that Panama, as a country, and the Canal, which has just announced carbon neutrality by 2030, play in this scenario.

International commitments, such as the Paris Agreement, which seek to limit global temperature increase to less than 2 degrees Celsius above pre-industrial levels, have led countries to commit to increasing the amount of energy from renewable sources. More renewable energy creates a demand for storage, so that it can be stored when available and consumed when needed, as resources such as sunlight and wind are intermittent. There are two main technologies for storage in future projections: batteries and hydrogen. Although they are often presented as competitors, they are in fact complementary, because they have different applications: batteries are used in transportation and backup power, while hydrogen is used in shipping, aviation and industries.

One kilogram of hydrogen contains about three times more energy than one kilogram of LNG (liquefied natural gas), gasoline or diesel! This makes it a highly desirable fuel, but it is difficult to obtain, since pure hydrogen does not exist on Earth. Energy must be administered to molecules containing it in order to “produce” it.

At present, almost all hydrogen is supplied by fossil fuels and is known as gray hydrogen. Unlike gray hydrogen, green hydrogen is produced by splitting water into oxygen and hydrogen using electricity (electrolysis) from renewable sources. This process does not emit carbon dioxide.

The costs of green hydrogen will vary with renewable energy potential: higher potential represents lower cost, which gives countries like Panama an advantage. An expanded industry and appropriate regulation could produce green hydrogen for a cost of $2/kg in 2030 and $1/kg by 2050 in many parts of the world, according to independent analyses by Bloomberg New Energy Finance, S&P Global Platts and IRENA (International Renewable Energy Agency). These prices would make hydrogen highly competitive compared to any fossil fuel cost projections.

Why will it work this time?

Hydrogen has been explored in several iterations in the past, from before World War II, then again in the 1970s and 2000s. Back then, the feasibility was low. Now, as we are already experiencing firsthand the consequences of climate change and there has been a significant leap in clean energy technology, it creates an interesting moment in history. Reducing GHG (greenhouse gas) emissions now has a good (and improving) return on investment, with several promising additional benefits, such as green financing, carbon markets, taxes on emissions or differentiated costs according to energy source. 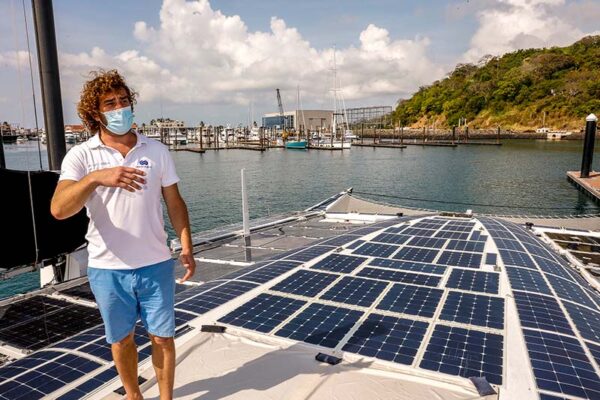 In the current geopolitical context, Panama is already a maritime hub, air hub, financial hub, among other areas. The potential to become an energy hub has already been identified and explored for different purposes. This same geographical position lends itself to serve as a connection between hydrogen production centers and the consumers with the highest demand. For example, according to the European Union’s roadmap, the import potential of this region is one to three million tons of green hydrogen per year by 2030, which opens the door to a market that balances the cost of production, storage and transportation. At the same time, Chile announced that it will have the cheapest hydrogen on the planet, also by 2030. This places the Panama Canal in an advantageous situation, since at this moment, the West Coast route from South America to Europe already represents 6% of the cargo passing through the interoceanic waterway (fiscal year 2020). This is one hypothetical example of several that could be developed, as several countries, such as Japan and South Korea, have announced that they will be importers of green hydrogen. The change of production centers in the energy market will be able to trace new routes that will establish the transit of hydrogen through the Canal.

The creation of H2ub Verde Panama would allow the creation of blending sectors for LNG, refinery fuels such as diesel and ammonia plants for use in ships. All these green hydrogen submarkets would allow supplying aviation with synthetic hydrogen fuel, international maritime transport with ammonia, and land transport with fuels with lower sulfur content. As a geographic hub, these hydrogen by-products would be distributed to the region.

How can we prepare?

The versatility of hydrogen is attracting research funding from a diverse group of multilaterals, governments and companies. We must take advantage of these funds to learn about the feasibility of this hydrogen hub and associated value chain.

The creation of a national hydrogen strategy, prioritized incentives and possible pilot projects should be evaluated. Early action on the policy side has proven effective for the adoption of other technologies and should be replicated for green hydrogen.

How to implement this change?

The IEA has identified four opportunities, all favorable for the Panama Canal, to increase hydrogen supply and demand, based on existing industries, infrastructure and policies:

How to take the first step?

Costa Rica, Colombia and 30 other countries already have or are working on national hydrogen strategies, while Chile has already dedicated 12,000 hectares of the Atacama region to developing the hydrogen industry. The situation is ripe for an investigation and a financial and technical feasibility study, identifying potential opportunities and barriers. Having a clear strategy would allow a calculated decision to be made in terms of timing, scale and scope, minimizing risk and maximizing value generation for stakeholders.

So, is this hydrogen-based renewable wonder a feasible example for Panama? Yes, it certainly seems so.

The author is Strategy Manager and Performance Measurement at the Panama Canal.