The red and white water storage tanks of the Mount Hope Water Treatment Plant have been a familiar sight to generations of Colonians throughout the history of the province.

This plant is located in a very solemn historical place: Mount Hope is the name of the cemetery where workers of the construction of the railroad and the Canal from the Caribbean lie buried. The water treatment plant that was installed there in the early Twentieth Century bears the same name and is responsible for providing drinking water to the facilities of the Gatun Locks, the city of Colon and surrounding areas.

A colonel in charge

When the construction of the Canal was initiated by the Americans, the sanitation of the towns was considered of utmost importance. Colonel William C. Gorgas was appointed sanitary director of the Canal project in 1904 and with his staff of specialists established a rigid quarantine for ships arriving in Colon and Panama from suspicious ports that could be a source of contagious diseases. In addition, he implemented far-reaching sanitary programs, including the drainage of ponds and swamps, fumigation, use of mosquito nets and construction of public water systems. The need to design and build adequate aqueducts and sewage systems in the small towns of the Canal Zone and in the cities of Colon and Panama became his main objective.

In 1905, an earthen dam was built and a reservoir formed at Brazos Brooks, a stream located approximately two and a half kilometers south of Monte Esperanza.

A steam pumping station and a four-unit pressure filtration plant were installed at Monte Esperanza. From this station, a 20-inch diameter main pipeline was laid to the city of Colon, located 3.22 kilometers away. This initial system used chemical disinfectants and pressurized sand filtration systems to partially clean the water before distribution, but it retained a high iron and algae content that caused the water to have an unpleasant color and odor.

Because of this, homemade distilled water was still the preferred drinking water among the population of Colón.

Due to the need to provide more and better drinking water supply, on February 23, 1914, a new water treatment plant began operating with the following features: aeration basin, sedimentation basin, rapid sand filters, chlorination, clean water reserve tank with a capacity of 520,000 gallons, and the main pipeline of 30 inches in diameter. The total investment in the plant was $292,198.10.

During that first year, it supplied an average of three million gallons per day (MGD) to supply a population of 37,000 people. The new plant was, in practically all aspects, the same as others built in the United States at that time. The only difference was the aeration basin that was used to break the water into a fine spray as a treatment for sedimentation. This system, in addition to aiding in the elimination of odors and tastes, also decreased the iron content of the water by oxidizing and precipitating the portion that exists as ferrous oxide or hydroxide. 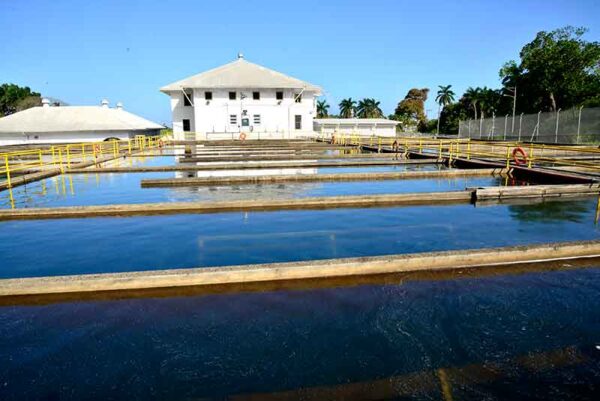 In 1932, its iconic elevated water storage tanks were added to the water treatment plant’s landscape, standing 57.60 meters high and holding one million gallons of water each.

In the early 1940s, due to population growth, the plant was expanded and a new 30-inch pipeline was added. This was in order to reach a production of 14.5 MGD of water.

In the 1980s, the chlorination equipment, chemical dosers, and residual chlorine analyzer were replaced; the chlorination building was expanded and the manual control system was replaced by the Supervisory Control and Data Acquisition (SCADA) system, which is software that allows remote control and supervision of industrial processes.

By the year 2000, production reached 24 MGD and between 2002 and 2004, the plant was expanded again to increase production to 35 MGD in order to meet the increased demand in the city of Colón. This level of production is still in force and the plant continues in its mission to be a source of health and hygiene for a large number of inhabitants of the Atlantic coast.

Red Allen, official photographer of the construction of the Canal, captured images of the beginnings of the plant. His photographs, many unpublished, are part of the catalog of official photos taken during the construction of the Panama Canal, which the Historical Memory Unit is taking great care to preserve. Archives on the Canal’s water treatment plants can be consulted electronically through the Alexandria search engine, and others can be consulted directly at the President Roberto F. Chiari Library, from 7:00 a.m. to 3:30 p.m. Monday through Friday. 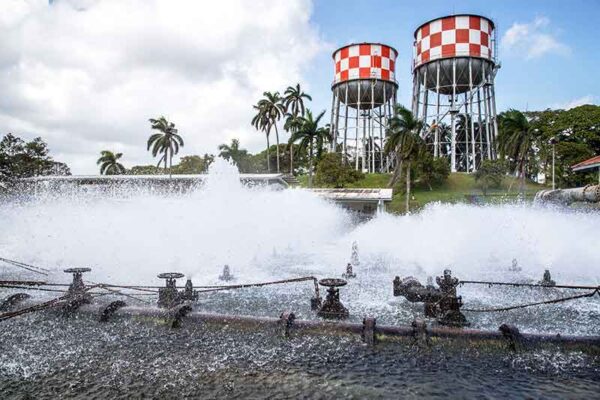