The unusual spectacle began early in the morning. The huge Titan crane entered the Miraflores Locks for a special mission: to remove gate 112 of the east lane, as a preamble to the dry chamber works scheduled for the months of June and July. 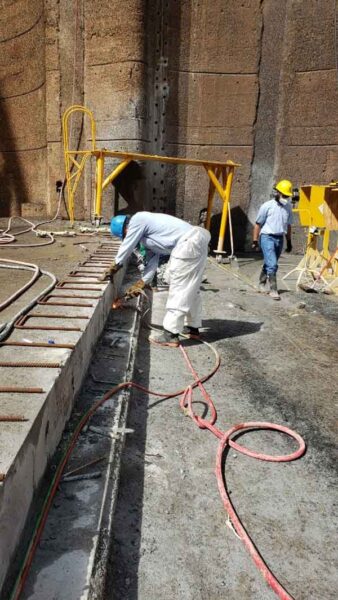 Once the floating crane was in place, some twenty workers began the task of securing the gate to the crane cables and separating the structure from the chamber. By 10:25 a.m., the Titan was hoisting the huge gate with several workers on top of it, properly secured. “It was a fast and precise operation,” Wilfredo Yau, submerged equipment reconditioning engineer for the Locks Division, told El Faro.

The large crane headed for Lake Miraflores to take the 112 to the Fleet and Equipment Management and Maintenance Division, known as “La Industrial”, in Colón, where, together with the 113, it will be rehabilitated for several months.

Maintenance with a capital “M”

“Definitely, maintenance is everything for this Canal. In the case of the Panamax Locks, such as Miraflores, they are structures that are more than 100 years old; they are a combination of civil and mechanical structure, which have many electrical, electromechanical and electronic components; and like a car, they require periodic maintenance, no matter how new they are… so these locks also require all the necessary maintenance to continue providing service to our customers,” Yau points out.

He goes on to say that the Canal has a commitment to its customers and to the country, so each worker must do his or her best to provide expeditious service to customers. Yau is responsible for the major maintenance of all the locks’ submerged equipment, which are mainly valves and gates.

“Every time there is a locks closure for maintenance that impacts operations, we know we are doing it to provide the best service to our customers,” he says.

A native of the San Miguelito district, Wilfredo Yau is married and the father of four children. He is a structural civil engineer with a master’s degree in Business Administration and is IPMA Level “A” certified.

Yau joined the Canal in 1985 as a grade 1 clerk for one year. Between 1987 and 1997, he worked as a civil engineer in a precast concrete company and as a structural engineer. He then rejoined the Panama Canal Commission in July 1997 as a civil engineer in the Maintenance Division. In 37 years of work, he has covered diverse areas such as civil works, maritime operations, expansion program, among many others.

The second phase is major maintenance, which is only possible without water in the chamber. These tasks, which involve some 300 workers from different divisions, are led by Carlos Patterson, electronics engineer and supervisor of the Miraflores Maintenance Unit. Patterson says that, for nine continuous days, the team worked in two 12-hour shifts with almost 200 workers each day. The overhaul work mainly involved changing the seals on gates 112 and 113, as well as replacing two sets of intake valves on the northeast side of the locks, due to their longevity.

“We do periodic reviews of the actual condition of the equipment and assess its condition before proceeding,” says Patterson.

He adds that the dry chamber is also used to inspect the culverts and make repairs to the seals of the rising stem valves, check the sealing of the rest of the gates, and measure the flow rate of water leaking into the chamber to leave a written record.

“Maintenance has a primary function at the Canal, and that is to enable operations, so it is vital. But we also have a special focus which is to save water: because if we have leakage and we don’t maintain it, we lose it. So our commitment to the business is that maintenance also preserves water,” says Patterson.

Other minor work in the dry chamber consists of cleaning sediment that accumulates (stones and logs), cleaning the drains and changing the defenses. Once the major and minor tasks were completed, the Titan crane returned to Miraflores for the reinstallation of the two gates rehabilitated at La Industrial.