Due to its high resistance to abrasion, impacts and low friction self-lubricating surface, much lower than those of steel and most plastics, the Panama Canal is now betting on another use for high molecular density polyethylene: in the locks’ floating fenders.

After more than two years of planning, including purchasing time, preparation of the anchorages and manufacture of the counterweights, the Infrastructure Maintenance and Civil Works Division began execution of the project to install floating fenders in the Cocolí Locks, on the Pacific side. 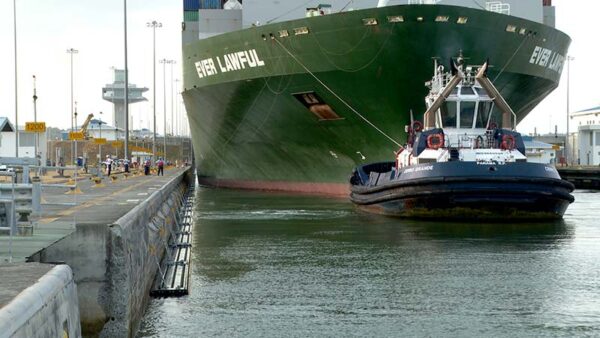 Between February 16 and 17, 35 floating fenders were installed in the lower west chamber of the Cocolí Lock, where there are greater tidal differences. Each piece is 11.3 meters long; 1.20 meters wide; and 0.90 meters high. In this sense, the fenders float at the same level of the chamber when the vessel makes its passage.

In order not to interrupt the transit of ships, a total of 40 workers from different divisions took part in the tasks in two “windows” or spaces, the first two of eight hours, which allows the operation of the Canal. It was a joint effort that brought together crane and boat operators, surveyors, divers, riggers, concrete and iron workers, as well as control house operators and lockmasters, who completed this first phase of the project.

“We are developing the floating fenders project with the intention of testing a new system that will give greater protection to transiting vessels and reduce fender maintenance costs,” said Avelino Cevallos, civil engineering supervisor of the Panama Canal’s Civil Works Maintenance Division.

He added that the new floating fender system is being evaluated and, if it works as expected, it will be replicated in the rest of the lock chambers at Cocolí and Agua Clara.

Cevallos, in charge of the project, explained to El Faro that the floating fenders are built with high molecular density polyethylene plastic components, which due to their great resistance, durability and low friction, can translate into safer and faster transit and savings in lock maintenance costs. 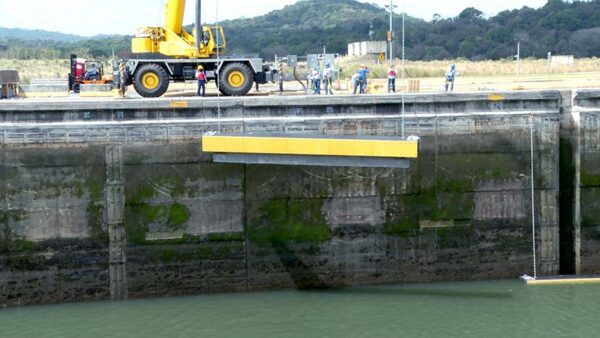 Thermoplastic polyethylene is characterized by its high resistance to abrasion, oxygen, ozone and low temperatures, a combination of properties that make it an engineering plastic; consequently, it is used in special applications.

“In the Panama Canal, says Cevallos, high molecular density polyethylene (UHMW-PE) has been used for more than 30 years”.

Properties and uses of high-density polyethylene

The increase in the industrial use of high-density polyethylene parts is mainly due to two properties: durability and versatility. Polyethylene is one of the materials with the greatest number of application possibilities and innovations.

Thanks to the ease with which high-density polyethylene can be molded at the manufacturing stage, it is used in industries as far-flung as the automotive industry, electrical appliances and medicine. Polyethylene systems can be found in seats, housings, technical laboratory equipment, armrests, headrests, and even in adhesives for joining different parts. 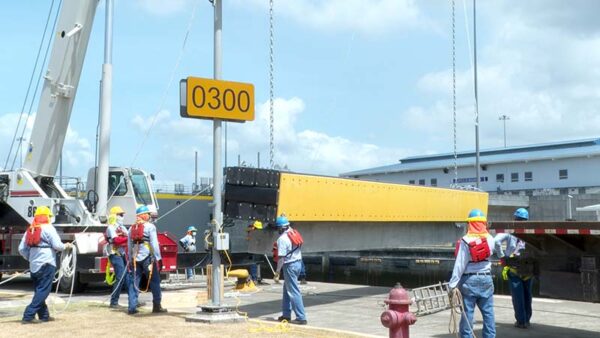 The most common method of manufacturing this type of parts is by injecting polyethylene into molds. Molds for polyethylene parts have undergone great advances that allow the final polyethylene part to require hardly any retouching: the final product comes out of the mold with the desired shape. In fact, today the use of polyethylene in vehicle interiors is around 15-20% of all plastics used.

The durability of polyethylene ensures that its performance is maintained throughout the life of the product. It is a material resistant to atmospheric agents (water, sudden temperature changes, wind, among others), and to mechanical actions such as puncturing, friction or pressure, which makes it one of the best options for industrial applications.