The dry season is underway, and with it begins the biggest challenge of the year for the Panama Canal.

For a period of approximately 120 days, there will be no rain and it will be up to the interoceanic waterway to manage the water it has managed to store in its reservoirs during the rainy season in the most efficient way possible.

More than two million people depend on this expertise, who are supplied with water from drinking water treatment plants that are supplied by the Canal’s lake system. These reservoirs also store the water necessary for the operations of the interoceanic waterway, which during the last fiscal year, contributed more than two billion balboas to the National Treasury.

Since this task is so important, the Panama Canal has established procedures to implement a series of actions that, although coordinated from different areas of the waterway’s operation, have the same objective: to save water.

These actions mainly involve the Integrated Operations Control Center, which controls the transit of ships, the Locks Division, which develops the operational part, and the Water Division, which monitors the rain that falls in the Panama Canal Watershed (CHCP) and then enters Gatun and Alhajuela.

Each one fulfills a different role and in a coordinated manner, they manage to adapt the operation to meet the challenges posed by each dry season. The achievements are the product of the sum of the experiences and ideas of each of the groups, acknowledges Ramón Porcell, Locks Division Manager.

“Each year, savings goals are set, depending on the water that has been stored during the previous year’s rainy season,” said Porcell.

He explained that the Neopanamax locks have water reutilization basins, whose use is activated more frequently at this time of the year.

“Something different happens in the Panamax locks that do not have these basinss. In these locks, the ingenuity and contribution of the Canal workers has been put to the test because there, strategies have been devised such as the cross-filling of the locks, which implies synchronizing the passage of two ships in the two existing lanes to reuse water”, the specialist explained.

For every four cross-fills that are practiced, the equivalent of one lockage is saved, that is, some 200 thousand cubic meters. The current goal is to save three lockages per day. This means that this operation must be carried out at least 12 times.

In addition to this maneuver, there are other strategies that can be carried out with smaller vessels: the use of short chambers (the chamber is closed with the closest gates), and the tandem, which consists of entering two vessels in a single chamber of the lock, as long as the dimensions allow it, in order to take advantage of the space and use the water more efficiently.

“Contrary to what has been happening during recent times, 2021 was a rainy year in the watershed. It rained 5% more than the historical average, which has allowed us to comply with all the water services provided by the Canal,” said Erick Córdoba, manager in charge of the Water Division.

This is a positive fact, but it is not enough to ignore how irregular the weather has behaved in the region recently; in six of the last 10 years, rainfall has been below the historical average, including the second (2015) and fifth (2019), the driest year in the last 70 years in the CHCP.

“The bonanza of 2021 made it possible to fill the Alhajuela and Gatun reservoirs to their maximum operating level and in total 1,759 million cubic meters of water were stored. This resource will allow the Canal to continue providing uninterrupted services during the 2022 dry season, which began on December 24, 2021,” said Córdoba.

The first warning about the need to save water comes from the Water Division, where  Córdoba is in charge. The specialists who work there register the beginning of the dry season and establish a forecast of how long it will last. With this data, eventual activities such as hydroelectric power production are suspended and the necessary coordination with the rest of the groups is established.

The Organic Law that created the Panama Canal Authority clearly establishes that it is responsible for “managing the water resources for the operation of the Canal and the supply of water for the consumption of the surrounding populations. The Canal lake system supplies water to more than 50% of the population residing in the provinces of Panama, Colon and Western Panama.

The Canal reservoirs supply eight water treatment plants, including the largest in the country and in Central America, the Federico Guardia Conte. Two more plants are under construction and one of the existing ones is being expanded.

In total, these plants consume 1.5 cubic hectometers of water. 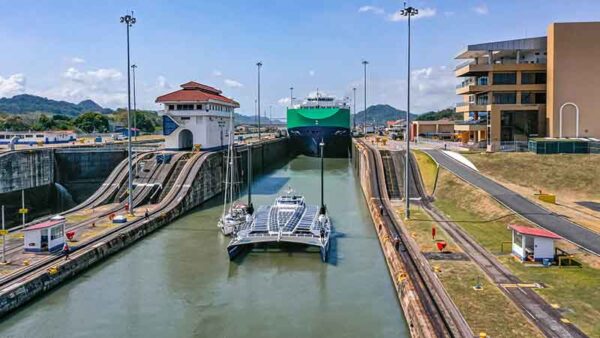 But the use of water is not only limited to the transit of vessels and drinking water, but also contributes to the development of agricultural, forestry, industrial, commercial and tourist activities.

In this regard, Cordoba recalled that, although 2021 was a good year in terms of rainfall, the resource is finite and is exposed to pressure due to increased demand, so in addition to the measures implemented by the Canal, it is important that all users of this source use water responsibly.

“Water saving measures began before the 1980s,” recalled Porcell, “at that time, they were only exercises that Canal operators developed voluntarily, and over the years, all that experience has been key. The climate has changed and demand has increased; now they are held every dry season”.

While this is happening, the Water Program is moving forward with its goal of achieving an optimized water management system that provides solutions to the problems that arise, so that the Canal can count on the resource throughout the year and continue to serve the country and world trade.

Last November, it was announced that the U.S. Army Corps of Engineers (USACE) was contracted for consulting and technical advisory services for the Water Program.

As part of these services, studies previously conducted will be reviewed to evaluate possible alternatives and identify other analyses, develop required models and simulations, as well as prepare conceptual designs, among other program activities.

Future scenarios that include the possible impacts of climate change are also considered, in order to create greater resilience in our systems, in the population and in the management strategy of the CHCP.

For the Canal, responsibly managing water use is a priority. Taking the necessary actions to guarantee the availability of water means fulfilling our mission to contribute sustainably to Panama’s prosperity.