Since its opening in 1914, the Panama Canal has always been associated with the avant-garde and innovation. Even before, during its construction, when new technologies were developed to make possible the dream of linking two oceans.

That link is still alive more than a century later, as the interoceanic waterway is constantly at the center of transits that demonstrate the capacity of human ingenuity. For example, two “snapshots”.

Last June, the interoceanic waterway received an unusual visitor when an experimental US Navy vessel known as an unmanned surface vehicle (USV) crossed the Panamax Locks as part of an “autonomous” test passage.

What does this mean? All ships arriving at the interoceanic waterway do so with their own crew; however, when they are about to begin their 80-kilometer journey across the isthmus, a Panama Canal pilot or pilot takes the reins of the vessel to steer it from one ocean to the other.

However, this experimental vessel does not require a crew. The U.S. Navy vessel Nomad is what is known as an “unmanned” or autonomous vessel; that is, it is driven remotely. This is one of two vessels that the U.S. Navy has tested to assess its operational feasibility.

The Nomad made its passage from the Gulf coast of Mexico to the West Coast of the North American country, with 98% of that passage in autonomous mode, and in manual mode during its transit through the Canal. In January of this year, the Pentagon announced that one of the two ships involved in the so-called “ghost fleet” had traveled more than 4,700 nautical miles, almost entirely autonomously.

The Ranger, the other ship in this fleet, transited similarly in October 2020, including crossing the Panama Canal in manual mode.

According to U.S. authorities, this type of vessel allows testing the safety and effectiveness of autonomous maneuvers on the high seas, which are remotely controlled from a center for unmanned operations on land, operated by U.S. Navy personnel.

Of course, I still love you

Also last June, the Panama Canal was once again in the spotlight, this time due to the expectation generated among the community of followers of tycoon Elon Musk, responsible for Tesla vehicles, known for their autonomous circulation.

Specifically, on Friday, June 25, 2021, one day before the fifth anniversary of the opening of the expanded Canal, the Neopanamax Locks received the Mighty Servant 1. This semi-submersible transport vessel carried SpaceX’s Of Course I Still Love You (OCISLY) autonomous aerospace port platform on board. 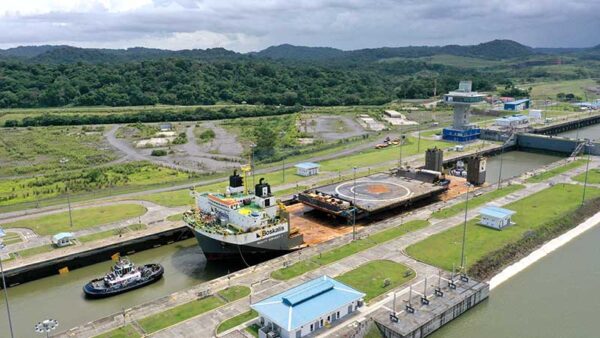 OCISLY is used for SpaceX’s rockets to land at sea after completing their orbital trajectories. SpaceX is the company Musk founded in 2002 as part of his aspirations to travel into space.

Since its departure from Cape Canaveral, in the state of Florida, on the East Coast of the United States, OCISLY aroused interest in social networks and blogs that follow every step of the movements of SpaceX spacecraft. On this occasion, the expectation was tinged by the ship’s crossing through the Panama Canal.

Due to its dimensions, OCISLY transited the Neopanamax Locks aboard the Mighty Servant 1, a vessel similar to those that transported the locks gates of the new Canal to Panama between 2014 and 2015.

Like the Nomad, the OCISLY platform requires no crew when offshore to receive SpaceX rockets.

The OCISLY’s voyage caused a stir on social media. After its transit through the Panama Canal, last July it arrived at its destination in the port of Long Beach, California, on the U.S. West Coast.