Materializing the idea of excavating a canal in Panama was mainly a geological adventure. And it was precisely the lack of this science that was one of the biggest failures for the French company at the end of the 19th century. They were very proud of having mastered the sand of the Suez Canal, but they could not contain the expansion of the rocks in the Culebra Cut. The Americans, warned of how hard it would be to excavate the mountain range, took greater care in studying the rocks of the Canal.

“That oceanic passage with North American vision faced a terrible reality… very soft and slippery rocks like the ones we have in the Cascadas, La Boca and Cucaracha formations, but also resistant areas like the Pedro Miguel formation, which required blasting and drilling”, explains Roberto Miranda, a geologist with 40 years of experience and a specialist in Canal rocks.

But after the inauguration, the observation of the land would be oriented towards sustainability. How to prevent landslides in the Culebra Cut to maintain unaltered the passage of ships? How and where to build new facilities and expansions of the interoceanic waterway? To ensure that the waterway is safe and reliable, knowledge and constant study of the geological conditions of the Canal land became a mission.

“This map is like the Bible to me,” says Romie Coronado, Geology Supervisor at the Canal, referring to W.P. Woodrin’s 1947 map.

Woodrin was a paleontologist who did the geological exploration for the 1936 Third Set of Locks, and his results formed the map that is the basis for all maps of the Canal area. Another passionate geologist was Robert Stewart. He was a pioneer in the studies that sought an interoceanic route through the Darien in the 1960’s.

He studied the Baru Volcano, the dam on the Bayano River and directed the geological analysis of the Las Americas Bridge. His wife, Jay Stewart, was also a geologist and worked with him in the investigation of the Cretaceous rocks (the oldest rocks of the isthmus), north of the Canal Watershed. She is said to have been very dedicated and maintained a rigid system of quality documentation.

High level professionals such as Jaime Arrocha, Francisco Ponce, Roberto Campos, Derek Irving and Luis Palma have contributed to the geological science of the Canal. Geologist Francechi is remembered with much appreciation, “Pastora’s desire was always to take Canal geology to its highest level,” recalls Miranda, “Pastora is Pastora,” we used to say in the office.

The work of Panama Canal geologists focuses on two outdoor activities: drilling and geological exploration. “Every morning, the colleagues go out with their yuma to the field and in the afternoon they download all the information to the computers and update the maps,” says Coronado. The yuma is a specialized computer into which the data that comes up on a given route is entered. “That is the function of the geologist, to walk, walk and search,” laughs Mauricio Lacerda, who, in addition to geology, studied physics.

Drilling is a technique that allows “columns” of several meters of rock to be taken to the laboratory, which geologists analyze and store. They are kept as “geological books that narrate the history of the land of the Canal”, says Itza Díaz, geologist. At the Canal, land and underwater drilling is done in conjunction with the team of drilling and exploration technicians and the soils and materials laboratory team.

The team led by Romie Coronado is made up of two types of professionals: scientific geologists and engineering geologists. The former focus on pure soil characterization and the latter on the practical function. The objective of both is “to ensure that the interoceanic waterway is safe for navigation,” says the manager. Her team feeds data to the geotechnical office, which is in charge of developing stabilization and maintenance projects. 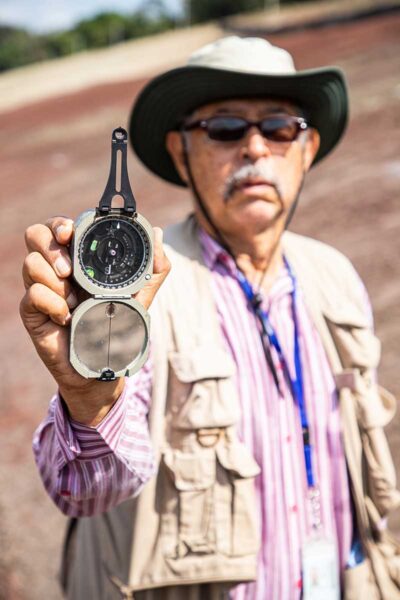 The wonders of Panamanian soil

There are many secrets to be discovered in this land. The formation of the Isthmus is a theme of violent events: underwater volcanic eruptions, plate collisions, molten lava.

Rodrigo Arrocha, the youngest of the Canal’s geologists, says that under the Centennial Bridge there is evidence of a fossilized forest, “a volcanic eruption produced hot ashes that burned an entire forest”, something like a forest Pompeii. Arrocha hits on the starting point of the vocation: observation. Geology is essentially knowing how to observe. The child who marveled at the pebbles in the river dreams of being a world-class specialist in rock mechanics.

Another wonder of the earth is its relationship with water. “The water in the Canal is rainfall but it is also groundwater, and both sustain the flow of the rivers that feed the lakes in the Canal,” explains Enier Portugal, the team’s geochemist.

With a specialty in geochemistry, he studies in detail the aquifers of the Canal Watershed, identifies how much water they hold and how to protect them.

When he finished high school, Portugal won a scholarship to study in Bulgaria, and he says that “first you went to language school and then you decided what you were going to study.

When I saw in a museum a complete dinosaur put together and a collection of amazing minerals, I knew that was going to be my passion.” 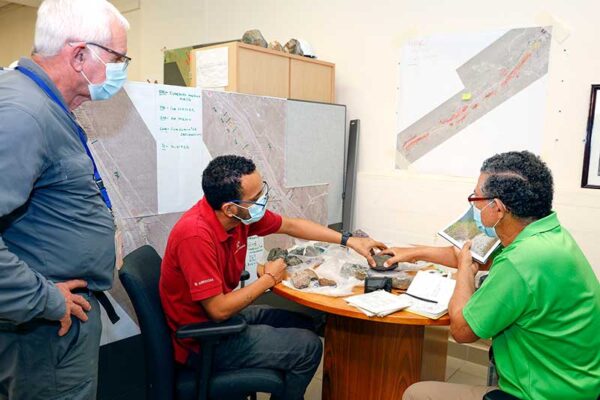 A world of possibilities

The field of geology encompasses a wide range of occupations beyond the Canal. The construction industry, the mining industry, the energy industry, state and private institutions all benefit from the work of these professionals. “With all this variety of sub-disciplines, we discover that there is scenic beauty in the landscape and they are the object of geotourism,” adds Roberto Miranda, who is founder of the College of Geologists of Panama.

“The geology we do at the Canal is civil,” sums up Romie Coronado, “it is pure and applied science on the land of the Panama Canal.”