What does Paul Gauguin have to do with Panama?

The painter, in the company of Charles Laval, arrived in Panama in April 1887, seduced by the magic of the tropics and in search of “the good savage” on the Panamanian coasts. He came from a bustling Paris, of bourgeois materiality and motivated by a deep personal search. Panama, at the end of the 19th century, is the scenario where a project at the service of a determined geopolitical vision for maritime development and commercial expansion is put to the test. For Gauguin, Panama is the place where he came to cut stone as a laborer for the Compaigne Universelle du Canal de Panama.

What was happening in the world at that time?

The social and economic context in France was determined by the great changes imposed by the Industrial Revolution, the great urban transformations of the late 19th century, and the emergence of a new bourgeois social class. The impulse of geography, from the organization of the Geographical Society of Paris, the triumph in the construction of the Suez Canal and the determination in the construction of the Panama Canal, are part of the temporal context of the artist.

Gauguin and the Panama Canal is the feature film being prepared by Panamanian filmmaker Frank Spano, who won the Ricardo Miro Award in the theater category with a work of the same name. Spano has a long career in the world of cinema, with several feature films in Spain. Today, we talked with him to learn more about this project and the work it addresses, from a psychological and purely human point of view, the figure of the French artist and his time in Panama.

Why are you so passionate about Paul Gauguin and the Panama Canal?

“My grandfather Efizzio Spano, a cabinetmaker and carpenter, came to Panama from Italy along with other Italian migrants for the construction of the Panama Canal. My family was part of the little Italy built in Vista Hermosa by migrants from that country. I am Panamanian, my mother is Panamanian. It may sound like fiction, but my earliest memory is when I was three years old, climbing down the stairs and walking down the runway at Tocumen Airport. I lived my entire adolescence in Panama. I remember the signing of the Treaties, among other events. I recognize myself as part of this place, of the Canal and all that gravitates around it. Living the Panama of Mano de Piedra Durán, and recognizing myself in the land of seven boxing champions, is part of it. I grew up in a city where, without a passport, it was possible to cross from one country to another. I am part of this place, of common stories that are still beginning to be told. The character of Gauguin is part of those early memories and the object of my narrative need,” Frank Spano tells us. 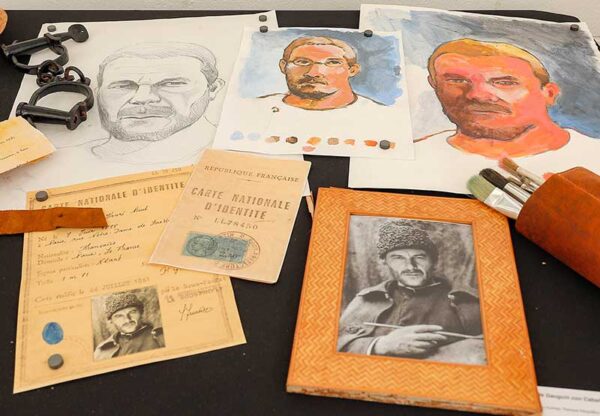 The theater and the film

“It all began in 2004, when my mother sent to Madrid, from Panama, an envelope with clippings of all kinds. As part of that package were recipes, movie listings, various news items, and among them, a short note that talked about an edition of a book of Gauguin’s letters. I looked for the publication and found all the painter’s letters and the references of his visit to Panama. The obvious was revealed: Gauguin had identified Panama as a destination to solve the most intricate labyrinths of his existence, and it was then that I decided to immerse myself in his inner world. Then, encouraged by my mother, I entered the play, Gauguin and the Panama Canal, in the Ricardo Miro competition in 2005. Since then, and for more than ten years, I have been delving into the existential universe of the painter.

The fiction feature film, Gauguin and the Panama Canal, achieved through public competition, in 2018, resources from the Panama Film Fund. Since then, we have been working on the project, with a high probability of achieving its premiere by 2022.

I have to say that my way of understanding life is marked by my childhood and cinema. I am grateful for the audacity of the programmer of the Savoy cinema – whom I never met – and for my mother’s generous irresponsibility in taking me to the double bill at that theater. Gauguin has been a traveling companion in recent years. It has become a narrative necessity, because I am essentially a storyteller. It’s been 15 years of a theme that has been growing inside me. I describe the film project as titanic and schizophrenic, because of the effort of trying to adapt to myself. The story I tell in my Gauguin play is different from what happens in the film.

The film tells the importance of Gauguin’s first trip when he abandons a family, five children, a job and a comfortable materiality. This man could have died in Panama and become just another cross in the French cemetery of Paradise. Panama is his first contact with the primitive art he was looking for. My work addresses that first narrative,” Spano explains.

How important are the Canal’s historical documents?

“The Canal is not only a geopolitical value. The Canal is a narrative and historical heritage. It is now that it starts the march of the creators to tell all the stories. Gauguin and the Canal is one of them.

In my case, the President Roberto F. Chiari Library and its archives will serve to reconstruct the construction of the Panama Canal, recreating the images that Gauguin probably saw in his passage through Panama. The photographs and documents are essential to understand the arrival of the technology and the decision to build a canal through Panama. I intend this film as an act of entertainment. I hope that people here and there will be encouraged to immerse themselves in history. Many stories of the Canal have yet to be told,” concludes Spano.