Lacking worries, little Miguel Angel Borbua, plays placidly in a land he just knows. The little boy does not suspect that months ago, this was forbidden territory; there abounded cockroaches, rodents and other vermin typical of an improvised garbage dump, of the several that exist in Chilibrillo, and that the community has proposed to eradicate. In this space, the garbage was collected and pots of recycled material were placed where ornamental plants and even some fruit trees grow. 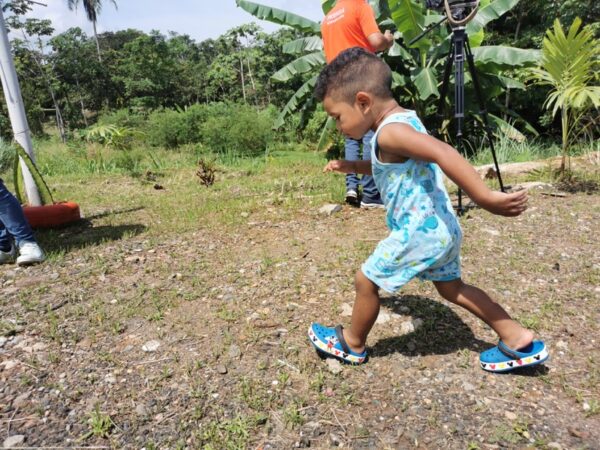 A large sign makes it clear that this site is now for recreational use and warns of fines for those who try to ignore this effort. The Watershed Advisory Council of the Chilibre and Chilibrillo region identified inadequate waste treatment as one of the main problems plaguing the community.

With the support of the Panama Canal, an integrated solid waste management project was initiated, which led to alliances with other actors to attack the root of the problem and turn these garbage dumps into community gardens.

Ignacio Ochoa, general coordinator of this organization, commented that it has been an arduous task, because to obtain permanent achievements, it was necessary to motivate changes in the mentality of the locals so that they would adopt new cultural patterns regarding waste, considering that much of it can be reused, recycled and even sold.

The Chilibre Community Board joined in this effort with maintenance work, the Municipality of Panama with recycling stations, and the Urban and Household Sanitation Authority (AAUD), which is in charge of providing waste collection services.

The plan of the neighbors is to recover the areas, transform them into gardens and develop activities to guarantee their good use. “In this, the role played by each of the actors who have joined in has been key,” said Ochoa.

Yoira Perea, Representative of Chilibre, praised this union of forces, since this is a district that, for the most part, is part of the Canal Watershed, a fact that challenges the people of Chilibre to be the protectors of the water resources of this important area.

Sustainability of the initiative

Eliminating improvised dumps was the big task, a milestone that, as Ochoa commented, implied a change of mentality, but also had to create the conditions to convince more and more people to join the proposal.

In this area, the Municipality of Panama placed seven recycling stations, which makes it easier for the locals to effectively separate waste and adopt the habit of recycling, “because in this way, the amount of waste that must be transported by the AAUD is permanently reduced,” explained Valentín Flores, a specialist from the Panama Canal’s socio-environmental team.

Aitza Ruíz, coordinator in the lower section of the Chilibrillo River, added that, to achieve this, they have received training and facilities for recycling, which allowed the participants to acquire the knowledge and become those allies so necessary to achieve the objectives.

The idea is implemented mainly by a group of women:

“Here, in addition to combating the appearance of clandestine dumps, river cleanup work is carried out, a nursery has been established and reforestation activities have been developed that seek to support efforts for the protection and conservation of the watershed’s water resources,” detailed Ruíz.

A successful model that is already being replicated

Although at the beginning they had little hope of success, as the community leader acknowledged, with the advice of the Panama Canal, the idea became a reality that strengthened the group, especially because of the achievements that had repercussions in other communities, whose leaders approached to learn about the process and request help to implement it as well.

A notable improvement in the water quality of the Chilibrillo River, in the area’s landscaping, and a decrease in the factors that can affect the community’s health, which together result in a better quality of life for the area’s inhabitants, are some of the achievements that the project’s promoters are proud of.

Four plots of land have been recovered and transformed into community ecological gardens. For the Panama Canal, the communities of the watershed play an important role in water conservation, which is why it supports actions such as those that today allow children like Miguel Ángel to have new spaces for recreation and an example of how to contribute to the protection of their environment and such an important area for the country.