There is no turning back. The decision is irreversible: countries, governments, companies and global organizations have agreed to confront the threat of climate change. Human activities such as transportation, waste generation, livestock and agriculture, in addition to the waste of energy produced by burning coal, oil and gas, are putting the planet at risk. If we are to avoid the most catastrophic effects of climate change, scientists insist that countries must take concrete actions to stop global warming. The maritime industry is aware of its role, and as part of this activity, the Panama Canal shares the commitment.

“The international maritime industry has taken the decision, through the International Maritime Organization (IMO), that ships will be zero carbon emitters by 2050. We are working with the shipping companies to define the new vessel that must transit the Canal, which must have zero carbon emissions”, or minimum emissions by the end of this decade”, said Panama Canal Administrator Ricaurte Vásquez Morales.

This transformation is necessary because it is estimated that ships are responsible for three percent of global carbon emissions, an amount comparable to that emitted by the most polluting countries.

For this reason, the International Maritime Organization (IMO) has set the goal of reducing emissions from international maritime shipments by 50 percent by 2050.

Already the Panama Canal announced in April 2021 its goal of carbon neutrality by 2030 as part of global efforts.

“This implies starting operations more efficiently with projects such as electric vehicles, photovoltaic energy and increasing operational efficiency, to subsequently reduce our carbon footprint, which at the end of the neutrality process, will be offset through conservation projects such as those carried out in the Panama Canal Watershed,” explained Alexis Rodriguez, environmental specialist of the Panama Canal.

Administrator Vásquez Morales detailed that among the actions of this plan is to “replace our fleet of tugboats with hybrid technology tugboats that reduce carbon emissions. Possibly when electric vehicles become much more standard, we will have to replace our combustion vehicles with electric vehicles, replacing the infrastructure that supports this“.

According to scientists, for every fraction of a degree of warming, the world will see more intense heat waves and droughts, as well as more floods and forest fires. Hence the importance of acting now.

While the Panama Canal contributed to reducing more than 13 million tons of carbon by 2020 by providing a shorter route for ships, the waterway recognizes the importance of making its own operation carbon neutral by the end of the decade. 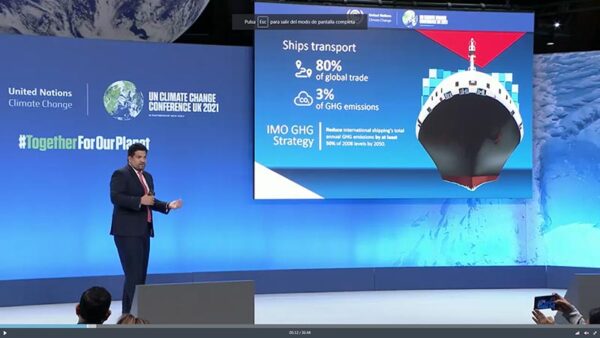 “This is our important role because we as the Panama Canal, by being aligned with these strategies, both carbon neutral and decarbonization, we will provide an added value to this route that precisely the customers of this entire logistics chain feel that the use of this green route of the Panama Canal is helping the environment,” Rodriguez delved.

Already in its watershed, the Panama Canal works hand in hand with communities to protect the environment, and by participating in events such as the United Nations Climate Change Conference, COP26, reaffirms that commitment to sustainability as one of the actors in the maritime world.

“The maritime industry sent a signal, Panama sent a signal and the Panama Canal was present within that signal that was sent, indicating that we are ready to start that process, to work together, but even more so to take care of our planet,” concluded Rodriguez.