Two years ago, Gatun Lake levels dropped to such an extent that it was difficult to use Pier 45; consequently, a team of Canal engineers concluded that the solution was to design a floating dock so that when the dry season arrived and the lake level dropped again, the tugboats would have an accessible transition area for the crew.

In the painting and sandblasting workshop in Gatun, Colon Province, iron and concrete structure craftsmen and painters were working on a kind of jigsaw puzzle, whose final picture will be of a floating dock that will serve the tugboats in Gatun Lake, in the Atlantic area of the Canal. 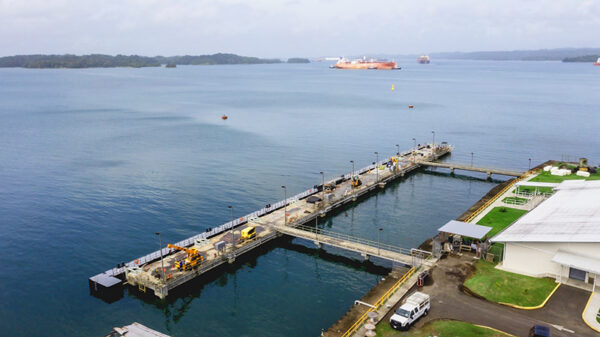 These experts are working on a schedule designed for five months, which includes the fabrication of 10 steel guides to which the pontoons or 20-foot containers will be attached to the fixed dock.

The million-dollar question is: why has a floating structure at Pier 45 made of concrete existed since the Neopanamax Locks began operating?

“The answer is climate change, which caused a severe shortage of rainfall in the Canal watershed during the dry season of the last two years, and the consequent drop in the level of Gatun Lake,” says Paul Bernal, supervising engineer of the Atlantic Installation Maintenance and Civil Works Unit.

He explains that as the lake level drops, the embarkation and disembarkation of tugboat crews becomes difficult. Thus, the solution lies in a floating dock at Gatun, just like the one operating at Diablo, at the Pacific entrance of the interoceanic waterway.

“In agreement with the Engineering Division, we came to the conclusion that a floating dock could solve this situation so that during the dry season, when the lake level drops, the tugboats would have an area where they could dock without making it difficult for captains and crew to embark and disembark,” Bernal emphasizes.

The floating dock components, he adds, were procured externally, while the 10 steel profiles or guides were fabricated in the Canal’s workshops. 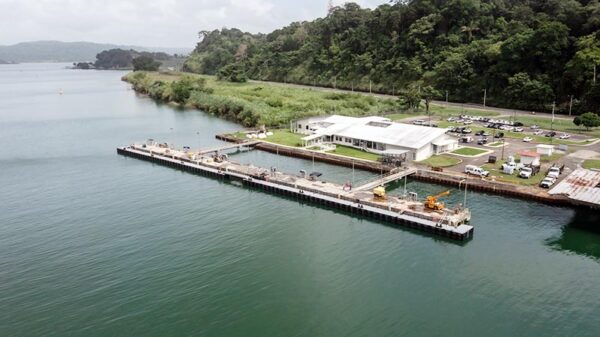 Containers in the water

After the welders and riggers installed the vitas, those metal pieces to which the vessels are moored, as well as the rubber fenders that will serve as protection for the vessels, the team is ready to move the 20-foot containers into the water; a task to which crane and heavy equipment operators are added.

“Right now, we are in the process of ‘launching’ the 10 containers into the water. Each one is numbered and with the respective couplings that will tie them to the guides installed on the fixed dock, which allow them to slide up or down, depending on the level of the lake, so that the tugboats can dock on the floating dock, without problems with the water level,” Bernal explains.

Once the 10 containers are attached to the guides, and as a final phase, the team fills the profiles of the guides with about one cubic meter of concrete, to allow greater rigidity to the structure.

Floating dock for a long while

As maintenance is a philosophy at the Panama Canal, every structure erected, installation or fleet of land and sea, for the organization entails a strict maintenance schedule, and the new floating dock at Gatun is no exception. Although, in this case, the manufacturer assures that it will be long-lasting and require minimal attention.

“These structures are designed with minimal maintenance in mind. Generally, the ones that suffer the most are the dock fenders, and as soon as that happens, we immediately change them, so they should last for many years,” concluded engineer Bernal.