Drinking coffee in Panama evokes the history, anecdotes and adventures of the great transoceanic passage. In its characteristic aroma you can perceive the air of our forests, the clouds of the western skies of Chiriqui, and above all, the present and future of the water that feeds the Panama Canal.

Coffee and its history begin in the mountains of faraway Ethiopia. Coffee is on the route of the pistachio, cloves, cinnamon and silk. On that road, we can imagine the silhouette of a hundred elephants loaded with spices on the shores of the Eritrean Sea. In the legend of the shepherd Kaldi and his flock of restless goats begins a story that reaches as far as Panama.

How did coffee arrive in Panama?

Some sources document that the coffee bush arrived in Cuba in the XVIII century, and the first coffee plantation is reported for the year 1748. That seed came from Santo Domingo and it is most likely that the bean came from Europe after another long journey from Africa.

Through the historian Castillero Calvo, it is known that coffee appears in Panama around the decade of 1780, from nearby Cartagena. We do not know for sure if the bean was for seed or for consumption. The first commercial records of this product are from Portobelo.

Where does coffee grow?

Arabica coffee, for example, is cultivated in average temperatures of 18 degrees Celsius; minimum temperatures of 8 degrees and maximum of 25 degrees. In Panama, some of the best known and most sought after varieties of coffee beans recognized in the international markets are grown.

The most well-known specialty coffee varieties such as bourbon and catuai appeared on the Panamanian scene, and later, as of 2004, the geisha.

Coffee traveled along the trans-isthmian road

The coffee traveled well from the Caribbean to the Pacific. It is known that it passed through the cobblestone roads and navigated the waters of the Chagres River, following the routes and paths that facilitated the trade of Central and South America. Dozens of travelers and chroniclers in their passage through the isthmus, narrate and confirm that they drank the brew on their way through the great Chagres.

In the Miller House (inn in the lost town of Gorgona), William Johnston (1849) tells us that “it was sipped hot on a white linen tablecloth, in silver coffee pots, for a dollar, and always accompanied by hot cake, boiled tongue, beet and butter“. The coffee of Panama kept awake the dream of those who were chasing the gold of California.

It was also sipped in the capital

The drink was served at parties and banquets. Thus, it was portrayed in the feast offered in the house of Rita Vallarino to the Colombian military man, Tomás Cipriano de Mosquera, in the house of the Obarrio family, in the year 1842. The story goes that the coffee was served at night, together with the liquors, before ten o’clock. 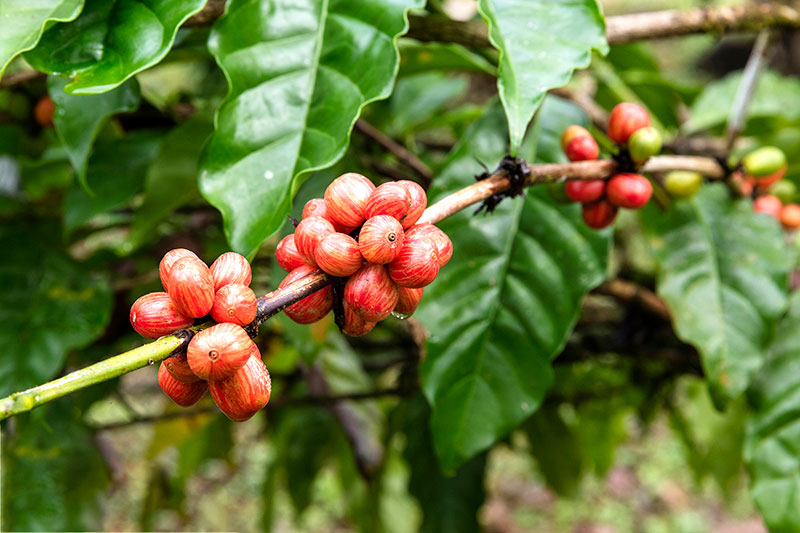 Coffee appeared on the public scene in Panama City during the gold rush and in the expeditions that explored the alternatives for an inter-oceanic canal. The fashionable place was the Café Francés in the Plaza Catedral. The room was located within the grounds of the Gran Hotel building, the best and most elegant establishment in the city, and where travelers paid a dime for a cup, a tenth of an American dollar.

Coffee continues to be a protagonist in interoceanic history. In the forests of the Canal Watershed grows the robusta variety, which is cultivated not only to enrich the water productivity of the tropical soils, but also represents an alternative source of income for the inhabitants of the watershed.

To date, 3,838,878 coffee seedlings have been planted on an area of 12,182 hectares in the Panama Canal Watershed. This production is processed in the roasting plant of the Association of Coffee Growers of the Cirí Grande and Trinidad sub-watershed of the Canal Watershed (ACACPA). This coffee, with smoky and chocolatey notes, is called Cuencafé.

This crop is an achievement of the Panama Canal Environmental Incentives Program, which, through reforestation with coffee, seeks to protect the forest cover of the Canal Watershed.

Elza Martínez, president of ACACPA, says that “we are aware that by growing our coffee we are helping to conserve Panama’s water resources“: water for two million people and for the transit of 13,000 ships annually.

Coffee continues to be the beverage that keeps dreamers and travelers awake.