What is an architectural landmark? In the modern sense, the term landmark refers to distinctive and prominent monuments or buildings used as symbols of a certain area, city or nation. Basically, they are attractive, easily recognizable buildings, and because of that popularity, their image is associated with the city or country in which they are located.

If one were to ask which buildings could be considered a landmark for Panama, some names would be quickly mentioned. Nationals might mention the tower of Panama La Vieja, or the Metropolitan Cathedral in Casco Antiguo. Foreigners would perhaps feel a certain affinity and interest for the F&F Tower, colloquially known as “el Tornillo“, located on Calle 50. There are even buildings in Panama built with the idea of being considered architectural landmarks, and with the passage of time, everything seems to indicate that they will achieve it, such as the Biodiversity Museum, designed by the famous Canadian architect Frank Gehry.

However, in Panama, there are some buildings that are highly recognized, nationally and internationally, and yet they can be difficult to name. We are referring to the much-photographed and admired control houses of the Panama Canal locks. Who is the creative mind behind these landmarks? Who designed them?

Born in 1860, Lord was a native of Rolling Stone, Minnesota (USA). After receiving his initial training at the Minnesota State Normal School and in architects’ offices in that state, he entered the Massachusetts Institute of Technology in 1884. In 1888, he traveled to Europe on a scholarship. He spent the academic year studying in the workshops of Honoré Daumet and Charles Girault in Paris, after which he visited Germany, Belgium, and, most important, Spain and Italy.

Upon his return to the United States in 1890, Lord joined the firm of McKim, Mead & White, where he worked on projects such as the Brooklyn Museum of Arts and Sciences, the Metropolitan Club, and buildings at Columbia University. Working at that firm cemented Lord’s fame. It is worth noting that between 1894 and 1896, Lord would live in Rome, Italy, where he would also work as director of the American School of Architecture.

Lord and the Panama Canal

On July 1, 1912, Lord was hired as an architect for the Isthmian Canal Commission. By this time, construction of the Canal was in full swing and Colonel George Goethals, chief engineer for the construction of the waterway, was already envisioning a post-construction Canal life where a workforce of 5,000 permanent employees could forge a future. Lord was already a well-known architect and had a good professional reputation, especially in the high society circles of New York, the city from which Goethals hailed.

Soon after being hired, Lord would quickly travel to Panama and stay for almost a month. The trip was a turning point in his plans to create permanent buildings in the future Canal Zone, as he was able to see the conditions, climate and topography of the construction sites. 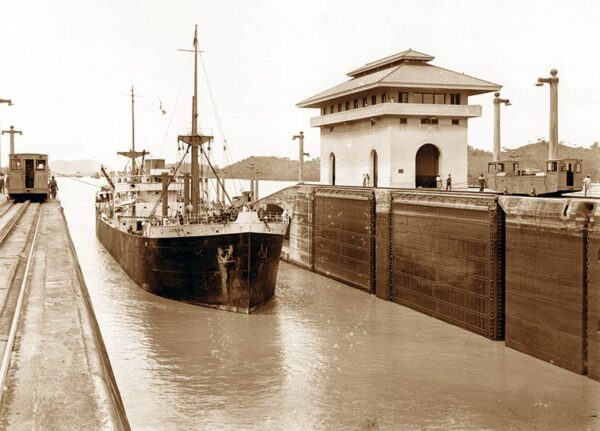 The lockages of the ships are directed from these buildings built on the central wall of the central chamber of each lock. There is a completely unobstructed view that allows an operator to handle all the actions involved in the passage of a vessel. The houses are characterized by a sobriety and austerity that at the same time reflect the monumentality and grandeur of the locks on which they are located. With their red tile roofs, reinforced concrete construction and arched gates, Lord would give an architectural seal that would be replicated in the control houses. It is worth mentioning that, in their origin, the houses showed a natural concrete tone and that with the passage of time, they would be painted in their characteristic white. Perhaps the most photographed architectural works in the country (especially the Miraflores building, located in front of the Visitors’ Center of the same name) are an emblem of the Canal and of Panama.

A building designed by Lord that rivals in popularity with the houses, is undoubtedly the Administration Building. It is located on the northwest slope of Ancon Hill, and was conceived to overlook the Canal and what would be the first permanent settlement in the area: Balboa. Built on concrete foundations, steel skeleton, reinforced stone concrete floor arches and concrete reinforced sawdust roof arches, the structure, again, denotes grandeur. Because of the large amount of space required, Lord felt that a building laid end to end would be too long, so he decided to make it E-shaped.

Lord was the first person to plan layouts for the Balboa area. He laid out the city around a central avenue, the Prado, with community buildings clustered at the end of Sosa Hill, and connected by a continuous gallery. It is worth noting that his layouts and designs for the Prado buildings were not used, and instead he adopted a variant layout and more simplified versions of the buildings he had conceived.

Defining the architectural style of the Canal Zone

When he began his work as an architect at the Canal, Lord referred to the style he was using as a “modification of the Spanish Renaissance.” Later, he would add that these buildings had a “decidedly Italianate” type of architecture, or with details reminiscent of the Southern European Renaissance style. All of this is congruent with the experiences Lord had had during his stays in southern Europe, both as a student and as a professional.

Today it could be noted that the architectural style of these structures is Italianate, but with a touch of aesthetic simplicity that, in large part, was added at Goethals’ request. Goethals instructed Lord to focus his labor on the houses’ works and the Administration building, while at the same time imposing demands for efficiencies and savings. In addition, Goethals appreciated the aesthetic impact of concrete as a building material and made this known to Lord. All of this influence from Goethals may have led to decisions on the final outcome of the structures.

Lord worked for the Isthmian Canal Commission for only 13 months. Goethals, tired of his principal architect working out of New York, decided to do without his services and opt for architects who would work on site. However, due to the impact of his works and some of the most important buildings, Lord would set the standard for the next generation of Canal Zone architects to follow.