An Equis on the path - El Faro | Canal de Panamá

Vilified, feared and somewhat mythologized, the Equis is the most abundant and dangerous of all the snakes in the country. Its name recapitulates tales of terror fanned by the collective imagination. Farmers and workers in wooded areas avoid its presence at all costs, knowing that its bite can be deadly. No one wants to encounter an aggressive Equis on the path, so a good deal of respect and fear falls within the range of reasonableness.

It has a wide distribution, occupies a variety of habitats, and is present in the forests of the Canal Watershed. It possesses excellent camouflage and easily becomes invisible in leaf litter. When the Equis shows its aggressive side, it moves very fast. Its attack is extremely fast and unpredictable, there is no time to react.

Although this predator is a good biological rodent control, it is indisputable that because of its potent venom, the Equis is a snake that represents a high risk factor for those who carry out activities in forests and grasslands. It is essential to follow safety recommendations at all times.

These can be summarized as using appropriate personal protective equipment, inspecting the area before carrying out outdoor tasks, and being vigilant at all times. Panama has the highest incidence of snake bites in the Latin American region, so we must emphasize the prevention of snake accidents.

The less negative and promising side arises from recent studies that reveal that certain toxins present in the venom of the Equis snake contain bioactive molecules that have antibiotic and antifungal effects, and also do not create resistance in the human body. Because of their value in public health, these molecules could be key to the development of pharmacological products for the treatment of infections that do not respond to conventional drugs. Small contributions such as this could bring this dreaded snake closer to the threshold of redemption. 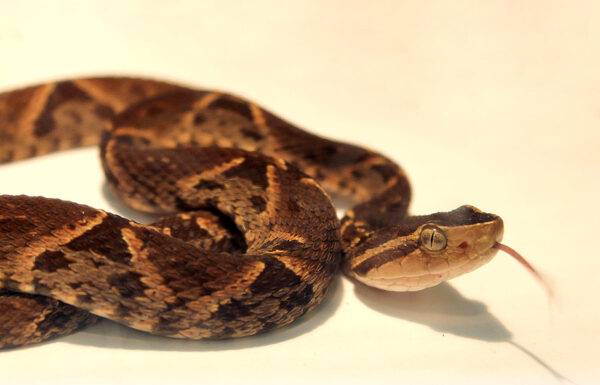 – It is a nocturnal hunter and feeds on small mammals such as rodents, wild rabbits, birds, lizards and amphibians. It is viviparous and very fertile (it gives birth to around 80 offspring). It has enormous fangs. Its venom destroys blood and damages body tissues.