On the rainy morning of Tuesday, September 6, the final major maintenance, or dry chamber work was being done on the west lane of the Gatun Locks in Colon.

The overhaul work was carried out between August 30 and September 7. During nine days, more than 200 workers from different divisions worked in two 12-hour shifts to rehabilitate gates 27 and 28. In addition, they changed the metal seals on both structures and the walls, as well as four rising stem valves and the concrete flaps, and carried out minor work on the culverts. 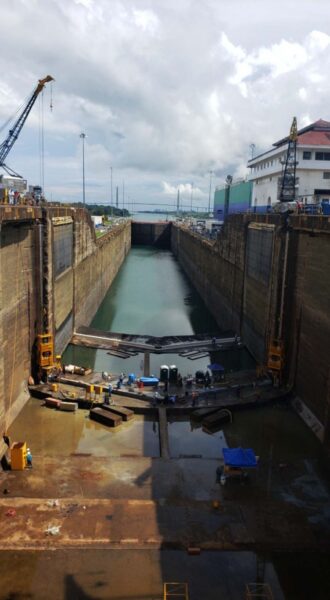 Amidst the bustle of machinery, one tone of voice stood out. It was Rigoberto Edgardo Cáceres Guerra, leader of the welding team. There he was with his inseparable communication radio, curious about the drone that was recording from above. His enthusiasm and good humor caught our attention so much that we decided to get to know him better.

Rigoberto Edgardo is a native of the township of Puerto Armuelles, district of Baru, province of Chiriqui; one of those who tell you that you need a passport to enter the “Federal State.” He studied a bachelor’s degree in literature and has an extensive list of technical and pedagogical courses and seminars taken in Colombia and Germany. Also, a trio of diplomas in leadership and organizational management, in Colombia; and of course, another dozen trainings in the Panama Canal.

He resides in the district of Arraiján, with his wife, Iris Mariela and daughters Delcys Gisselle and Yossyra Celenys. He joined the Canal labor force on January 7, 2000, with the Panamanian administration. He has been a leading welder since June 2011.

The satisfaction of being useful

Rigoberto tells us that his greatest satisfaction as a Panama Canal worker is having contributed his knowledge to the completion of the projects in which his Division is involved, as well as feeling useful, and that the organization can count on him for future projects.

He is 28 months away from retirement, and his message to his colleagues he leaves behind and to the young people who will join the ranks of the Canal is that they should be proactive, satisfactorily complete every task entrusted to them, and work as hard as the first day, because “the best letter of introduction is our work, well done.”

This chiricano does not plan to stay in leisure once he retires and tells us that he intends to apply what he has learned in applied technology to the design and manufacture of special models for wheelchairs, and mechanisms adapted to motor vehicles to help people with disabilities.

“One of the projects I want to carry out once I retire is an ergonomic wheelchair, since in this country when a person is left with a degree of disability, he or she usually has to adapt to a standard wheelchair, when it should be the opposite,” Rigoberto tells us.

Around noon, we say goodbye with a goodbye and, suddenly, the rain begins to fall in the chamber (which is no longer so dry), which brings together engineers, masons, painters and welders, and among them our interviewee, Rigoberto Edgardo Cáceres; one hundred percent Canalero pride.